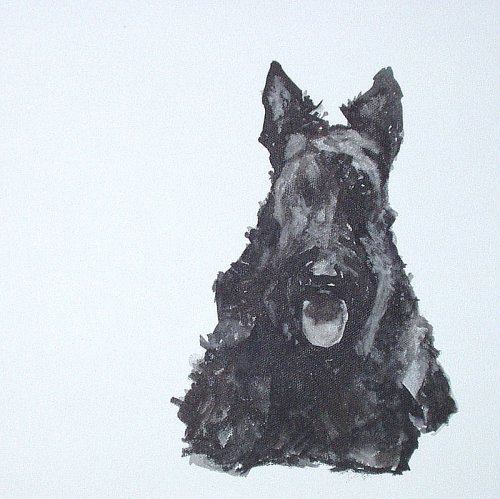 We can’t imagine a time when there wasn’t the Scottish Terrier because even in art and literature of antiquity, the breed seems to have always been around. Still, the origins of the breed remain a bit of a mystery. Known by many names during its history, including the Scotch Terrier, the Highland, and the Aberdeen Terrier, the breed has been a denizen of Scotland for at least several hundred years.

Some believe the original stock to have been brought in by the Celts, and probably the Scandinavians. Norsemen had been ruling the Hebrides and adjacent islands long before the Norman conquest, and there are records of the terriers which they brought with them. The Scottish, the Skye, the West Highland White, and the Cairn are all likely decendants of a common breed of Norse descent.

The first written record about a dog resembling the Scottish Terrier dates to the book, “The History of Scotland: 1436 to 1561,” written by John Leslie. Two hundred years later, a portrait of a young girl hugging a dog resembling the modern-day Scottie was painted by Sir Joshua Reynolds.

Modern Scotties have their origins in the kennels of Mr. J. H. Ludlow, who founded the Scottish Terrier Club of England, and who bred or owned many of the breed’s earliest champions. It’s believed that most, if not all present day Scotties stem from a single bitch, Splinter II, and two sires. In the book, “The New Scottish Terrier” by Cindy Cooke, Splinter II is referred to as the “foundation matron of the modern Scottish Terrier,” (or, as other have said, “the mother of the breed”) as most of the present-day Scotties trace back to her.