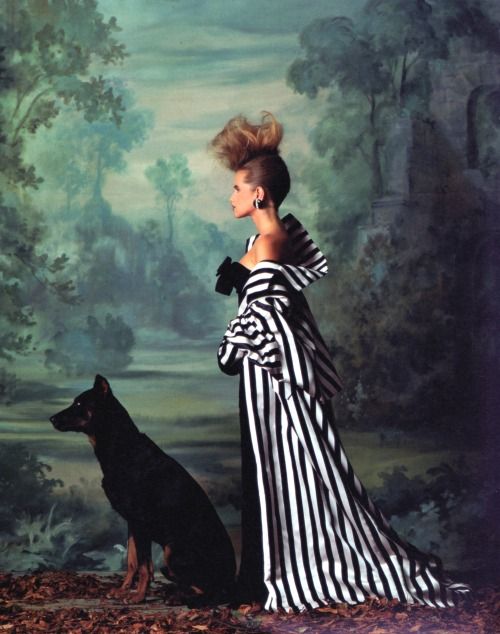 When it comes to the dogs that have been featured as part of fashion shoots for Vogue Magazine, we suppose many of us think of Poodles first, but the publication, in fact, featured quite a variety of breeds in its history. Sometimes, it was to inform readers of “new” dogs, and sometimes, the dogs belonged to the models.

In 1985, the photographer, Antony Armstrong Jones,  better known as Lord Snowdon (and husband of Queen Elizabeth’s sister, Princess Margaret), photographed the French actress, Isabelle Pasco, portraying her as the Marquise de la Robe Merveille, ‘the couturiers’ favorite client. She was dressed in a striped satin trench by Chanel which had been inspired by the black and white bustled gowns worn by fashionable ladies a hundred years earlier. Pasco’s own dog, a Beauceron named “Zozo,” was included in the pictorial. It would be another twenty-two years after this picture was taken that the breed was AKC recognized.