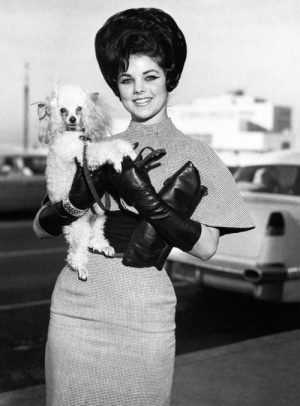 Elvis Presley may have been most associated with “hound dogs,” but he actually owned several breeds in his all too short life.  At Graceland, he had a Great Pyrenees named, “Muffin,” a Basset Hound,  a couple of Great Danes, a Pomeranian, and in the seventies, a Chow Chow named, “Get Low” who outlived his master by a year. If one breed, however, garnered a bit more affection than the others, it would have been the Poodle.

Elvis Presley with “Duke,” a Toy Poodle who belonged to Elvis’ mother, Gladys. ‘Duke’ was named after John Wayne

While stationed in Germany, Elvis had a Poodle named “Champagne,” and he would have two more at Graceland. He also gave his beloved mother, Gladys, two Poodles, one named, “SweetPea,” the other, “Duke” (after John Wayne). To an early girlfriend, Anita Wood, he gave a Toy Poodle named “Little Bit,” (though he gave a Maltese, “Foxhugh,” to one of his last girlfriends, Linda Thompson).

In 1962, another girlfriend flew from from Germany to spend Christmas with Elvis at Graceland. Elvis threw a private party for about 30 friends which is where the young lady gave Elvis a wooden cigarette box that played the song, “Surrender” when it was opened. Elvis’ gift to the young lady was a Toy Poodle that she named “Honey.” “She” of course, was Priscilla Presley.

Does anyone else miss Elvis?

12 thoughts on “Elvis’ Dogs (Before He Left the Building)”