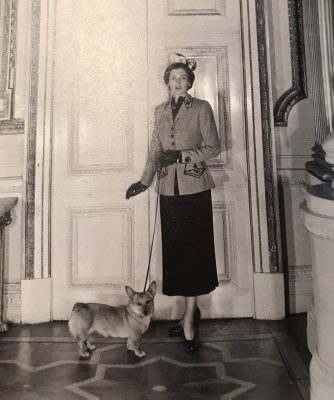 A favorite topic for food writers is to cover what “foodies” eat when they’re not writing cookbooks, hosting cooking shows, and being chefs at four star Michelin restaurants. In 1949, Vogue Magazine did something similar.

The magazine turned its lens to women who were in the fashion industry. “Fashion as it is worn by the women who understand it best,” they wrote.

One these women was Patricia Cunningham.

The eldest of six kids, Patricia spent much of her youth in Turkey, Cyprus and Egypt before the family moved to London in 1930. Family friends included diplomats and politicians, and one of Patricia’s earliest admirers was a young John F. Kennedy (her brother broke Teddy Kennedy’s wrist by pushing him down the stairs at the ambassador’s residence).

Patricia was sent to a finishing school in Switzerland at the age of 17, and when she returned to England, she joined the Women’s Royal Naval Service against her father’s wishes. An aptitude for languages landed her a spot on Bletchley Park’s code-breaking team. She learned Japanese so well in less than three months that she become her unit’s chief translator and was made an officer. Sometime around 1943, she became Lord Louis Mountbatten’s personal secretary.

After VJ Day, a new chapter began for Patricia. She’d started hanging around a Bohemian crowd, and after meeting a fashion photographer around Notting Hill, she began modeling. She was so good at it, she became the “house model” for a number of British couturiers.

One of them was British designer, Charles Creed, a mover and shaker of British fashion in 40s, and son of the man who claimed to be the first tailor to introduce tweeds into women’s suits.  In 1948, Patricia married Charles, and not long after the marriage, she was appointed “accessories editor” at Vogue Magazine, her job to find hats, gloves, shoes, and belts for fashion sittings.

In 1951, she was promoted to be fashion editor, but she continued to attend Charles’ fashion shows to take notes; top designers described Patricia as Charles “severest critic.” This falls in line with comments made of her by co-workers who described Patricia as having presided over the fashion pages of Vogue with iron determination and considerable flair.  Her judgement and opinions were valued, but they were often direct, and usually brusque.

Patricia also continued to do some modeling as Mrs. Charles Creed, and several shots had her holding the leash of her Pembroke Welsh Corgi, “Crinny.”

At the time of Charles’ death 1966, Patricia worked for the shoe dynasty, Russell and Bromley as a “trend predictor,” and she had remained a familiar figure at fashion shows. At the time of her own passing, Patricia had become a Jack Russell Terrier owner, and “Jimmy” even made it into his mistress’ obituary which appeared in The Independent in 2007:  The last line of the last paragraph read (to paraphrase): For many years, her Jack Russell Terrier, Jimmy, behaved impeccably for her, but was abominable to everyone else.

Image from Pinterest and believed to come from the fantastic book by Judith Watt, Dogs in Vogue