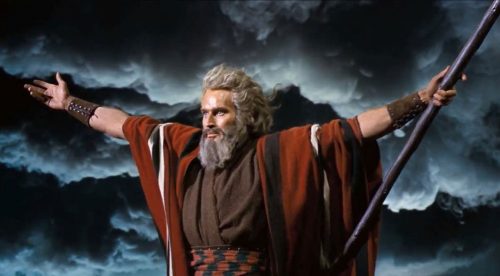 A younger generation may only know the actor from having watched “The Ten Commandments” at Easter, but their elders remember Charlton Heston for the larger-than-life characters he portrayed in a 60-year acting career. From playing parts like Moses and Michaelangelo, Heston brought power and depth to his parts, and sometimes, his charisma seeped into his personal life. His son, Frasier, tells a story he grew up hearing since he was too young to remember the incident:

Fraser, now 66, actually played the baby Moses in the “The Ten Commandments.” Anyone familiar with the movie will recall the scene in which the baby Moses is set afloat down the Nile River in a basket. In reality, the basket began to leak, and then sink. When Charlton went to lift his son out of the four inches of water he was in, still perfectly happy, a social worker mandated to be on set for movies involving children grabbed Charlton’s arm and said, “No, Mr. Heston, I’m the only one who can attend to this child during the filming.” Charlton looked at her and said with the resonant voice he used on the pharaoh [Yul Brynner, in the film], “Give me that child!” Not surprisingly, she did.

Though few biographies mention Heston’s role as a dog owner, one source mentions a Saint Bernard, but we found more evidence of his being a German Shepherd Dog person. In fact,  as young boy, he would pretend to be characters from all the books he read, and one of them was The Call of the Wild. He imagined himself in the far reaches of the Yukon, deploying his dog, “Lobo,” a big German Shepherd Dog, to pull him on a sled.

In 1972, Heston actually starred in a movie version of The Call of the Wild, and though the original novel described the canine character, ‘Buck,” as a Saint Bernard and German Shepard mix,  a purebred German Shepherd Dog played “Buck” in the movie.

From photographs, we know that Heston continued to have German Shepherds as a young father.