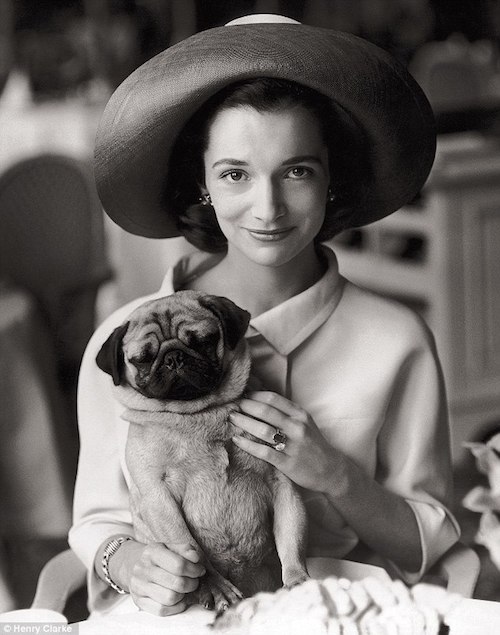 The younger sister of Jacqueline Kennedy Onassis, Lee Bouvier Radziwill, was a Pug owner, seen here in a photo snapped by Henry Clarke for an issue of Vogue Magazine in 1960. “Thomas,” the Pug used to accompany her for tea at the Ritz, and Caroline Kennedy was once photographed holding his leash outside Buckingham Palace (see below).

Radziwill counted Andy Warhol, Truman Capote and Rudolf Nureyev as friends in a star-studded life, but that life wasn’t all rainbows and lollipops. Both Lee and Jackie adored their father, the roguish John “Black Jack” Vernou Bouvier III, but by all accounts, dad had the most praise for Jackie, and Lee found it difficult to live up to her older sister’s accomplishments, i.e., equestrian prizes, top grades, marrying a future president.

Radziwill’s first marriage ended in divorce. Her second marriage in 1959 was to Prince Stanilas Radziwill, an ex—patriot Polish nobleman, and of this time, Radziwill said it was the happiest time in her life. Sadly, her second marriage deteriorated, and she and the prince divorced in 1974.

Lee tried to make a name for herself independent of her famous sister. She had an acting career that proved unsuccessful, then she became a highly watched member of the Café Society, but her actions (and her outfits) only became fodder for gossip columnists. She worked for editor Diana Vreeland at Harper’s Bazaar magazine, did public relations for designer Giorgio Armani, and then was an interior decorator in the 1970s. In 1974, the CBS television network gave her an interview show, “Conversations With Lee Radziwill,” in which she talked with famous friends such as Nureyev but it was canceled after six episodes.

Radziwill’s son, Tony, died of stomach cancer in 1999, less than a month after her nephew, John Kennedy Jr., was killed in a plane crash. Her marriage to third husband, American actor, choreographer, director and producer, Herbert Ross, ended in divorce shortly before his death in 2001. Shortly before he died, she returned to using Radziwill, her children’s name. Radziwill, herself, died just this past February 15, 2019  at the age of 85.

In 1930, Vogue wrote: “The next best thing to having the world at your feet is to have a dog at your heels,” so it made perfect sense for Vogue to include Radziwill’s Pug in their portrait 30 years later.