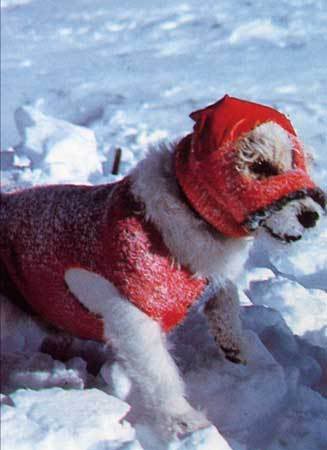 Only one dog has left its paw prints at both the North and South Poles, and his breed may surprise you.
When Explorer, Sir Ranulph Fiennes, (actor, Ralph Fiennes is a second cousin) and his wife, Virginia went around the world via both poles with the three year long Transglobe Expedition, they took their two year old dog, “Bothie” with them. “Bothie” had his own special bright red polar suit, balaclava and boots to keep him warm in the Antarctica, and when on a ship, he wore a safety harness. Though a good traveler, an intrepid hunter he was not; his response to seeing his Antarctic penguin was to run away at full bore.
The a 52,000-mile journey started in 1979, and after their return in 1982, “Bothie” was voted “Pet of the Year.” England’s Kennel Club Chairman invited Bothie to do a “circuit of honor,” and presented him a prize at the 1983 Crufts Dog Show. Bothie also made it into the Guinness Book of Pet Records.” Life-size “Bothie” toys, posters of the dog in his polar jacket “looking nobly into the distance,” and appearances on the children’s television program, “Blue Peter,” made the dog a celebrity.
Virginia “Ginny” Fiennes wrote about “Bothie’s” adventures in her book, “Bothie the Polar Dog.” She wrote that Bothie was “utterly fearless” throughout–except once when he had only himself to blame. He made the mistake of barking into a bowl- 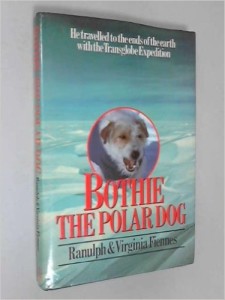 shaped Antarctic snow formation, and “to his amazement, the gloom barked back,” echoing with a “horrible demon-dog noise.”
Oh, didn’t we say? Bothie was a Jack Russell Terrier, and the only dog to have ever left his paw prints (or lift his leg) on both North and South Poles. It’s an accomplishment unlikely ever to be repeated because in 1994, the Antarctic Treaty nations banned all dogs from Antarctica out of fears over the transmission of diseases to the native seal population.
A footnote about Ginny Fiennes who died of cancer in 2004 at the age of 56: The newspaper, “The Telegraph” reported that she introduced to Britain the St John’s Water Dog, and at the time of her passing, there were some 50 descendants of the puppy she saved from an Inuit dog cull at Tuktoyaktuk in 1981. Ginny Fiennes was remarkable, and her obituary is worth a read.