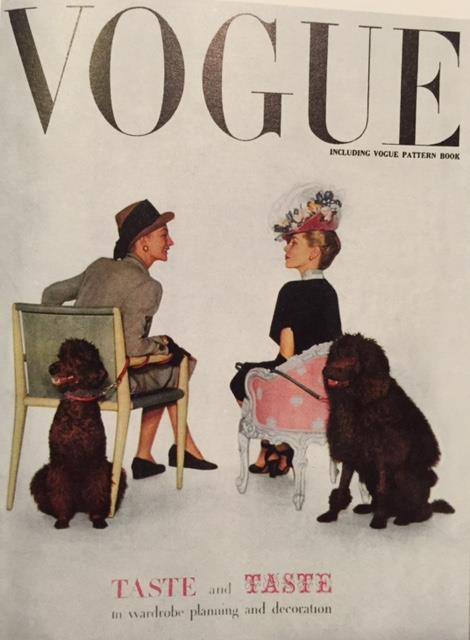 John Rawlings was a big deal in his day. He was a Condé Nast fashion photographer from the 1930s through the 1960s who created approximately 200 Vogue magazine and Glamour magazine covers. The one seen here (named “Taste and taste”) was published in 1945, and was the first peacetime cover Vogue did after the war. We’ve always liked Vogue magazine for its inclusion of purebred dogs throughout its 120+ history, and this cover not only underscores that point, but also humorously illustrates a collision of fashion between women and dogs. On the left is the modern woman of 1945 wearing the clean lines favored by the fashionable, while her Poodle is also stylish with its sporty Dutch clip. Her companion, on the other hand, wears a hat that would have been regarded as Victorian nostalgia, while her Poodle “suffers” in an “old-fashioned” (for the time) Lion cut.

We think there’s great value in studying the portrayal of dogs in fashion, advertising, fine art and pop culture. It tells us not only what our various breeds looked like at the time, but can suggest how society viewed them.

From Dogs in Vogue by Judith Wyatt, published by Little, Brown