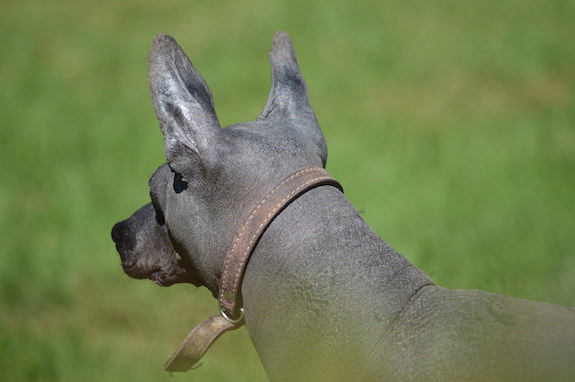 It might surprise some of you to learn that the first AKC registered Xoloitzcuintli, a dog named “Mee Too,” was registered way back in 1887.

Xolos were among the very first breeds recorded by the American Kennel Club, though its name at the time was the Mexican Hairless Dog.  After having been accepted by the AKC,  the breed was essentially dormant for the next half century. This changed – briefly – in 1940 when a Xolo named, “Chinito Junior” owned by Valetska Radtke of New York City earned an AKC championship. It was the first and only time a Xolo earned the distinction in its first go-round as an AKC accepted breed.

Xolos were recognized by Mexico in 1954, but in the United States, a couple of decades passed by without much activity or new registrations in the breed. In 1959, the AKC deregistered the Mexican Hairless/Xolo. A bitter pill to swallow given that in 1884, the Westminster Kennel Club dog show had had an entry of 600 Mexican Hairless Dogs (the only year that Westminster held two dog shows in the same year).

It was curious, as well. Only three years before the AKC had removed the breed from its registers, the FCI recognized it, perhaps nudged along by a publicized FCI-supported expedition in 1954 when it was realized that the Xoloitzcuintli would go extinct if the action wasn’t taken. British and Mexican dog enthusiasts led by a breed historian, Norman Pelham Wright, set off to remote regions of Mexico to discover and preserve purebred members of the breed. The ten that were found formed the foundation of Mexico’s program targeted at a Xolo revival.

As for the US, the Xoloitzcuintli Club of America was founded in October 1986 to regain AKC recognition for the breed. Two years later, the AKC voted to readmit the breed to its Miscellaneous Class starting in 2009. Founding members voted to recognize all three sizes (toy, miniature and standard) and both coat varieties (hairless and coated) were at their initial meeting. In 2011, the Xolo rejoined the AKC family – again – took its place in the Non-Sporting group.

The breed remains uncommon, and estimates are that perhaps 4,000 exist in the world. That said, the Xoloitzcuintli is designated as the Official National Dog of Mexico, and has been on the logo of the Federación Canófila Mexicana (Mexican Kennel Club) since 1940. It is also the symbol of the popular Mexican football club, Club Tijuana Xoloitzcuintles de Caliente.

Finally, and as if to come full circle, the breed is recognized by the Kennel Club of Great Britain, but as the “Mexican Hairless.”

Image: “Looking far ahead” by pontla is shared through a CC BY-NC-ND 2.0 license which allows us to copy and redistribute the material in any medium or format

One thought on “A Breed that was AKC Recognized – Twice”