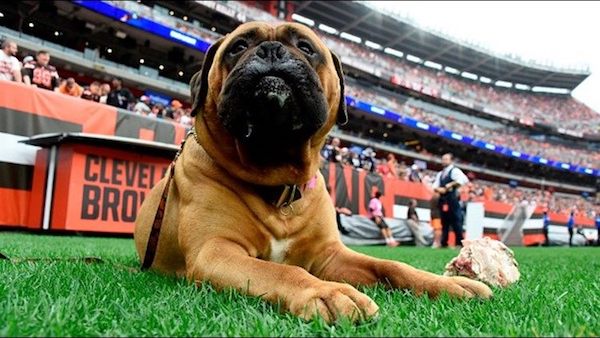 It was a profile, but not for an eligible bachelor – at least, not of the human variety. The bullet points were the most frequently asked questions about “Swagger” the Cleveland Browns‘ newest mascot announced in 2014 by Kevin Griffin, the Browns’ vice president of fan experience.

Playing off their stadium’s infamous “Dawg Pound,” Swagger, now a six year old a 140 pound Bullmastiff, leads the team onto the field during every home game. When not helping to rev up the crowd before and during games, Swagger enjoys chewing on a Pittsburgh Steelers’ Terrible Towel and elk antlers.

Presumably, Swagger has lost his bachelor status as evidenced by the litter of puppies he sired recently. Last January, Swagger paid a visit to the team’s Berea headquarters and brought along his sons and daughters, each wearing a little Browns jersey, to meet general manager, John Dorsey, and team employees for a bit of socialization.

In addition to his on-field responsibilities, Swagger makes regular meet-and-greet appearances with fans, and poses for photos at Dawg Pound Drive on Alfred Lerner Way before home games.  Swagger also makes select appearances at other club events. More than anything, however, we think Swagger is a wonderful ambassador for his breed.