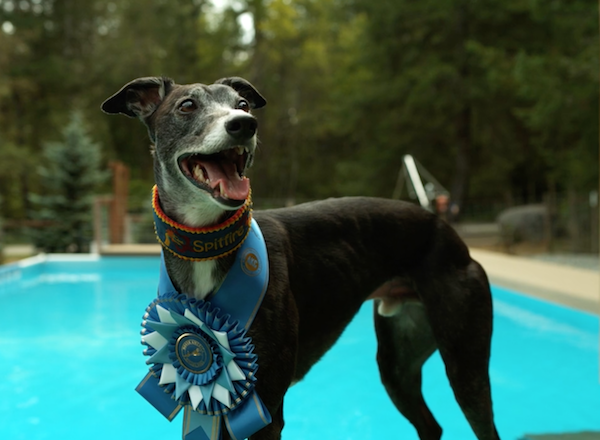 Prepare to be awed within two and a half minutes of the video below:
There were times during the video that it struck us: This dog is going to run out of pool.
If you enjoyed the video, you’ll like the one below which shows the “Behind The Shot” filming of “The Legend of Spitfire:”

The Legend of Spitfire – Behind The Shot

This is “The Legend of Spitfire – Behind The Shot” by E60 on Vimeo, the home for high quality videos and the people who love them.

In 2019, Sydney and Spitfire finished first in Extreme Vertical worldwide. They came in second in Big Air, and second in Speed Retrieve. What’s next for Team Spitfire? They are heading to an event in a few weeks, but then they’ll be competing at the Dueling Dogs World Championships located in Dubuque, Iowa in April. We’ll be rooting for them both!

As for the more distant future, Sydney tell us that she has a youngster who has shown amazing promise, a dog who has already jumped in the highest division at 9 months of age and won a world championship this year with DockDogs. Sydney also has Spitfire’s cousin, “Kegger,”  a few years younger, who has also been at the top of the game by placing third in distance this year against Spitfire and Sounders at the DockDogs championships, as well as having won the youth division with Sydney.

You can follow Team Spitfire on his Facebook page, but there is one more thing we want to mention.

Dogs like Spitfire are not an accident. A heritage breeder bred this dog. Someone who knew what they were doing, and knew that this dog and this young lady would be a good match. It is a sign of the crazy times in which we live that we are withholding their names to protect them.