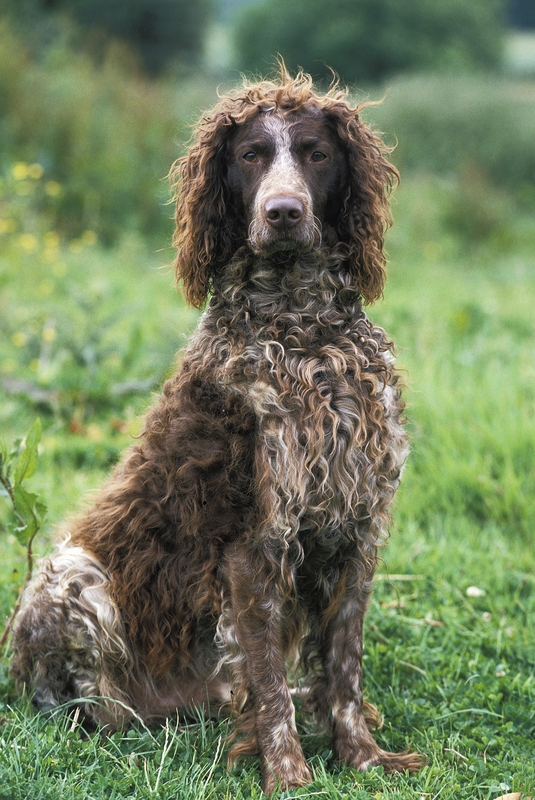 To suggest that the Pont-Audemer Spaniel is somewhat different looking is to understate the obvious. The “Ponty” or “Ponto” has spaniel ears, a muzzle reminiscent of the English Setter, and a tail that’s traditionally docked to one third of its length. Tails left intact are usually well feathered like that of a setter, and it’s not unheard for a Ponto to even have a shorthaired “rat-tail” like the Irish Water Spaniel’s. And then there’s that marvelous riot of hair that the FCI standard describes as “long silky very curly hair, joining the top knot to show a beautiful curly wig really framing the head.” Truth be told, the Ponto is probably the most unique looking of the Continental hunting dogs, save the doubled nostrilled Spanish Pointer.

A look at the breed’s ancestry explains a lot: Local hunting dogs descended from an old spaniel breed native to Pont-Audemer in France’s Normandy region were bred to Pointers and Setters brought over to hunt by well heeled English hunters on hunting holidays. The dogs were also bred to Irish Water Spaniels (now you see the genetic origin of those head curls that can take up to five years to fully develop). By the mid 19th century, the Ponto was established as a fabulous gun dog in marshes with a solid reputation among waterfowlers (and, to the chagrin of responsible breeders, popular with poachers, as well). Its hunting style is a blend of pointing, flushing

Sadly, that may have been the zenith of the dog’s popularity.

Interest in the breed declined, and two world wars wreaked such havoc on the breed that after WWII, the breed club allowed cross-breeding with the Irish Water Spaniel, Poodle and Barbet to increase genetic diversity. Forty years later, and breed numbers were still going in the wrong direction. By 1980, there weren’t enough litters being whelped for the breed club to retain its official status within the French kennel club, and even today, fewer than 40 puppies are born each year. Merging with a different breed club was probably the last thing anyone wanted to do, but in 1980 at the recommendation of the Société Centrale Canine, the Pont-Audemer breed club was merged with the Picardy Spaniel club where it remains to this day.

As the old expression goes, it shouldn’t happen to a dog. There are thought to be only 400 of these dogs in the world, and yet, the Pont-Audemer Spaniel is good with children, supremely attached to his owner, is a fabulous hunter of waterfowl in cold and bad weather, displays a firm point and is a reliably perfect retriever. He is fast and birdy, and has had respectable showings in French field trials, and a couple have been tested in Germany at the VJP or HZP level. And did we mention its sense of humor?

We hope to see breed numbers revive for this gem.

Image of a Pont-Audemer Spaniel (also known as the Epagneul de Pont-Audemer) by © Slowmotiongli/Dreamstime.com