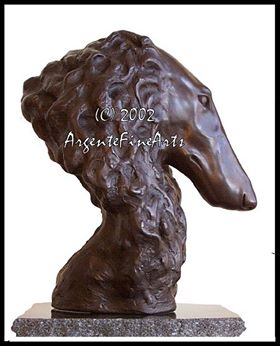 The Borzoi has long been associated with Russian nobility, and indeed, the breed has been an integral part of the national culture and Russian history for nine centuries. That’s what we know for sure. From this point on, we defer to breed experts and share only a mere snippet of what we’ve found regarding breed history;

Some sources believe the breed’s history in Russia began with Russian duke with a penchant for hunting and fast dogs. He imported a number of Arabian Greyhounds, but their thin coats were wholly unsuitable for Russia’s severe winters, and the dogs perished. More hounds were imported by the duke, but this time he were crossed them with heavier-coated native Russian breed described as powerful, long legged, and with a longer curved tail and neck. The result of these crossings was the Borzoi.  A book published in 1892, The Hunter’s Calendar and Reference Book, divided the Borzoi into four groups: The Psovoy Borzoi, the Asiatic Borzoi with pendant ears, the smooth coated Hortoy Borzoi, and the Brudastoy Borzoi with a stiff or wire-haired coat. The Psovoy Borzoi had many varieties, but all the types conformed to the same general characteristics.

That said, some sources dismiss all of the aforementioned, and say that the Borzoi types mentioned in that book were really just South Russian lurchers.

Other sources maintain that the Borzoi came from an Asiatic dog that came into Russia hundreds of years ago and over time, evolved into today’s Borzoi.  Whatever the exact origin of the breed, the ancient dog described by the “standard” of 1650 (more of a description than what today’s breeder would consider to be a standard), was built for speed, had little or no stop to the skull, featured a tremendous depth of chest, and in all other regards illustrated the Borzoi in words.

Emancipation of serfs in 1861 was a difficult time for the breed. As nobles began to lose their power, they moved to the city and either reduced the size of their kennels, or abandoned them altogether. Many dogs were destroyed, but some were taken in by the newly freed citizens. The Russian Revolution nearly drove the breed to extinction, but later when the Communists took over, Borzoi were killed outright, their association with the Czar and an oppressive aristocracy dooming them to death. Several Russian nobles euthanized their beloved dogs, themselves, rather than let the dogs fall into brutal communist hands.

An unknown number of Borzoi (which, by the way, is the plural form of Borzoi) survived in remote villages and farms, beneficiaries of a country vast in size.  In these towns, Constantin Esmont, a Soviet soldier, encountered the dogs and liked what he saw. He photographically recorded them in the 1940s, and eventually persuaded Soviet authorities that the Borzoi was worth saving, if or no other reason than to control predator populations that threatened livestock.

Few dogs left the country during the Soviet era, but enough had been sent to the west before the Russian Revolution to sustain decent numbers. The first Borzoi known to have left Russia, or example, was a pair given to Queen Victoria by the Russian Czar. Prince Edward was also given a pair that produced puppies later shown at British dog shows.  A keen advocate of the breed was Queen Alexandra who kept and bred many of the dogs. In those days, the breed was called the Russian Wolfhound (which wouldn’t change to the Borzoi until 1936).

The first Borzoi to come to the United States came from England in the 1880’s.  The AKC recognized the breed in 1891, and in 1903, the Borzoi Club of America was founded as the “Russian Wolfhound Club of America.”

There are some wonderful sources for additional reading, and one of them is the Borzoi Encyclopedia.

Image: “Guardian of the Steppe (c) Argente Fine Arts Lifesize Borzoi Headstudy by Deb Vicee 2002
You may want to join Borzoi Art & Collectibles on Facebook to see more of Vicee’s work, and some other amazing Borzoi renderings