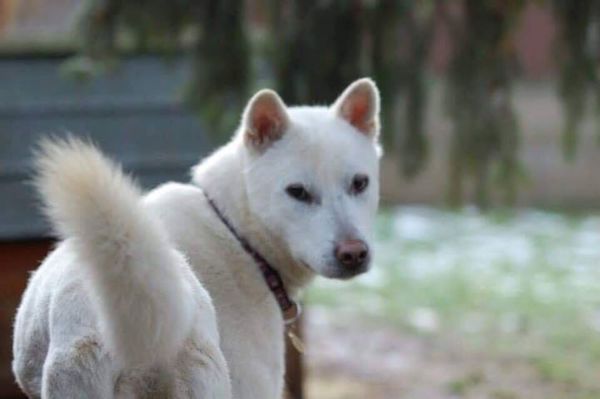 Once upon a time in a land far away, a hunter took pity on an injured she-wolf he found in the forest. All the hunter asked in return was that the wolf one day bring him one of her pups.  The wolf kept its promise, and the pup became a great boar hunter, and the forefather of the Kishu Ken.

Breed legends are wonderful, and we’ve found that there’s often a germ of truth to them, usually with regards to a breed’s essence. The dignified Kishu Ken is a brave, courageous and powerful hunter highly prized by the Matagi, traditional winter hunters of the Tōhoku region of northern Japan.  The Matagi admired the breed’s courage, and have long acknowledged the role it has had in saving the lives of many hunters. Bred to hunt deer and boar, the Kishu is a quiet hunter, silently stalking its prey and striking at a moment’s notice – much like the wolf in the legend shared by Japanese dog breed historian, Shigeru Kato. To this day, many Kishu Ken are still named for the wolf from where legend says they came.

The Kishu Ken of today is the result of thousands of years (some estimates are of at least 3,000 years) of breeding in the Kishu region (Mie/Wakayama Prefecture) of Japan where it hunted in the steep, deeply vegetated terrain of volcanic mountains.  There is a Japanese expression to describe the breed’s hunting ability: “One dog, one shot,” which means that the Kishu would keep the prey at bay until the hunter caught up and got close enough to dispatch the animal with one shot. The breed is still used in Japan to hunt boar, but mostly they are kept as wonderful companions.

Like other Japanese breeds, the Kishu Ken’s population suffered during World War II, but because of the mountainous and isolated region in which they lived, as well as the protection of hunters who valued them, they suffered a bit less than other breeds.

The Kishu Ken was standardized in 1934 through the Nihon Ken Hozonkai (NIPPO and declared a National Monument in Japan the same year.  In 1982, it was recognized by the FCI, and by the United Kennel Club in 2006. It has been part of the AKC Foundation Stock Service since 2005.