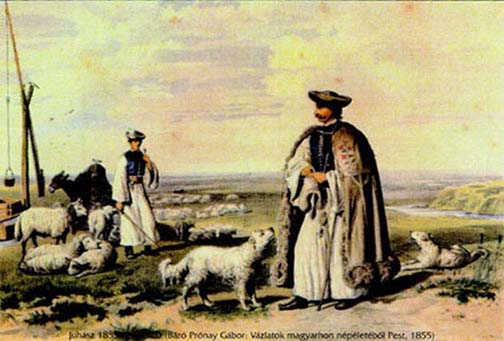 Records of the Kuvasz‘s earliest origins put the breed in Mesepotamia and the Steppes of the Ural Mountains around 3500 BC. Exploration of the city of Ugarit in 1931 by Sir H.J. McDonald included the find of a clay tablet with the breed’s name inscribed in cuneiform, but the most famous mention of the breed by its modern name is in the Code of Hammurabi.

By 900 AD, routes established by nomadic tribes were also used by Magyarok to conquer the Carpathian Basin in Hungary. Traveling with them were the “Ku Assa” (“Dog of the Horse”) dogs that probably bred with native Hungarian dogs to create the ancestors of today’s Kuvasz. It was in Hungary that the breed developed more fully to become the extraordinary dog we know today.

Kuvaszok were livestock guardians that exhibited not only the patience to watch their flock for days on end, but also the courage to take on wolves or rustlers. It wasn’t long before Hungarian noblemen took notice of the dogs, and by the 14th and 15th, the Kuvasz was a fixture in the kingdom.

The reign of Matthias Corvinus, a popular King of Hungary (1443-1490) was a dicey time for the king whose court was beset by treachery and intrigue. Matthias trusted his Kuvaszok more than his Royal Guardsmen, and it’s said that he kept a brace of Kuvasz with him at all times. Matthias established a breeding program and sometimes gifted a Kuvasz to a nobleman from his Royal Kennels as a special honor.

Long after Matthias, commoners and peasants came to own the dogs who continued highly adept at guarding their stock and farms. In time, fanciers discovered these beauties, and the first dog show at which Kuvaszok were entered was in Vienna in 1883, two dogs shown by Count d’Esterházy, a strong supporter of the breed. The first Hungarian breed standard was written in 1885, and the first Hungarian breed registry was founded in 1905.

The breed was nearly annihilated by World War II, dog likely shot on sight while protecting their farms or, as some letters of the time suggest, hunted by occupying troops. It’s been written that at the same time, some officers were known to have taken some of the dogs home with them. and a few others survived in remote villages.

When the war concluded and a factory owner wanted a Kuvasz to guard his property, he scoured Hungary and found fewer than 30 dogs left. Because his efforts, the efforts of dedicated Hungarian breeders, and people from other parts of Europe, the Kuvasz was re-populated in Hungary. Interest in the breed was renewed again after the 1956 Hungarian Revolution. What followed in rather quick succession was a revised breed standard written in 1960, with FCI acceptance coming in 1963.

The breed didn’t come to the United States until the 1920s, and the first Kuvasz was entered in the American Kennel Club Stud Book in 1931. The Kuvasz Club of America, established in 1966, became the breed’s official parent club in 1993. Full recognition came in 1974.

One thought on “A Snippet of Kuvasz History”