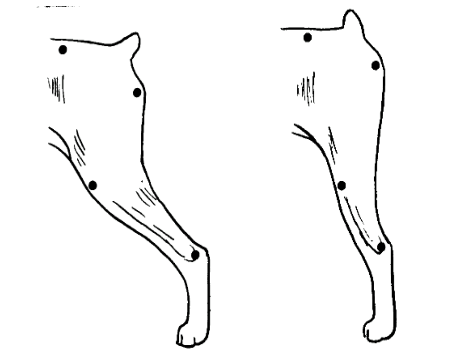 Dog fanciers (people who show and/or responsibly breed their purebred dogs) tend to talk a lot about “angulation,” but pet owners should know what “angulation” means too because it can impact, for example, their decision to jog with their dog, for how long and on what kind of surface.

Simplistically put, “angulation” refers to the angles formed when a dog’s bones meet when standing up. Angles form in a dog’s shoulders, hip joints, pelvic area, rear assembly, and other places we’ll discuss over time. For now, however, we’re talking about a dog’s rear angulation.

“Proper” angulation for a dog’s breed enables the dog to do the job for which it was originally bred. Generally speaking, too much angulation (the diagram at the left) can lead to joint, nerve and muscle damage. Too little (seen at the right) is called being “straight in the rear.” Too little AND too much angulation results in a dog with reduced endurance. A dog’s loyalty and big heart will compel it to keep up with its jogging owner for miles, but if the dog is built incorrectly, it will suffer. Over time, the dog may become arthritic and it’s owner will never know that all that jogging wasn’t helpful because they didn’t know the importance of structure. Don’t be that person.

There are many books on the subject, but we prefer books that are easy to understand and well illustrated. The first would have to be the classic by Rachel Page Elliot, “Dogsteps, Illustrated Gait at a Glance.” Another book is “What’s Your Angle: Understanding Angulation and Structure for the Performance Dog Paperback” by Helen Grinnell King. We also came across a web page you may want to review to learn a bit more: http://www.worldwideboxer.com/movement3.html