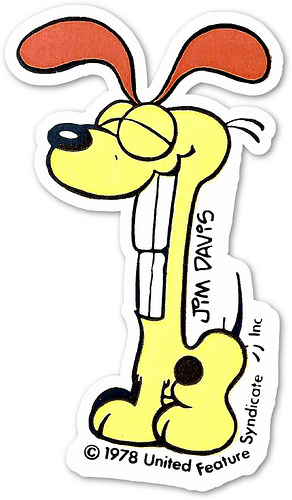 While most of us would probably guess that Peanuts was the world’s most widely syndicated comic strip, it’s actually Garfield. Interestingly, both comic strips feature a Beagle. “Snoopy,” of course, is Peanuts’ wildly imaginative, supremely confident canine master of disguise who first made his appearance on October 4, 1950. From the time of his debut, he pondered life from the top of his dog house while slipping between the alter egos of Joe Cool and the Red Baron.

Most sources indicate that “Odie,” is a Beagle, as well, though in the movie version, he was played by a pair of dogs who were a Dachshund/Terrier mix. The feline star of the strip, “Garfield,” simply calls Odie a “purebred clown” (when he isn’t calling him a moron since a running gag throughout the strip is Odie’s idiocy). Unfair! Odie has shown flashes of perspicacity, and is fully capable of communicating articulate sentences through his barks.

Comics and cartoons love the Beagle.  In the wonderful British clay animation comedy series, Wallace and Gromit, Gromit is a Beagle who knits, plays chess, reads the daily paper, excels at tinkering with electronics, and is an excellent pilot. “Underdog,” was the undercover superhero living as ‘Shoeshine Boy,” but like Superman, he could fly, had super strength and was untouched by normal weapons. Mr. Peabody, from the Rocky & Bullwinkle cartoon, was the genius dog who shepherded viewers through famous historical events in the time machine he built, while Poochie appeared in The Simpsons.

It's time to test your breed knowledge, or how good you are at deducing a breed from the language in its AKC breed standard. The following phrase is from such a standard, though we've left out the breed name. Your challenge is to identify the breed, and hey, if you recognize this as YOUR breed, be a good sport and sit this one out. The answer will come in the next couple of hours in the form of a photo-answer. Ready? (and it's not the breed in this photo): "Renowned for speed and endurance, the (breed name) has a strong but racy body, a deep chest with plenty of lung room, a strong back, broad loin and well-defined musculature. A balanced, powerful dog with no exaggerated parts, the (breed name) possesses the grace and attitude of a well-conditioned athlete."
... See MoreSee Less

When the German Kennel Club (VDH) and the Federation Cynologique Internationale (FCI) both agreed to officially acknowledge the "Wolf-Chow," they insisted that the name be changed. The German Kennel Club, however, objected rather strongly....
... See MoreSee Less

On the list of breeds named after a location, one breed is sometimes forgotten. Ironic, since this breed is named not for a border, city, region, or even country, but for two entire two continents, Eu...