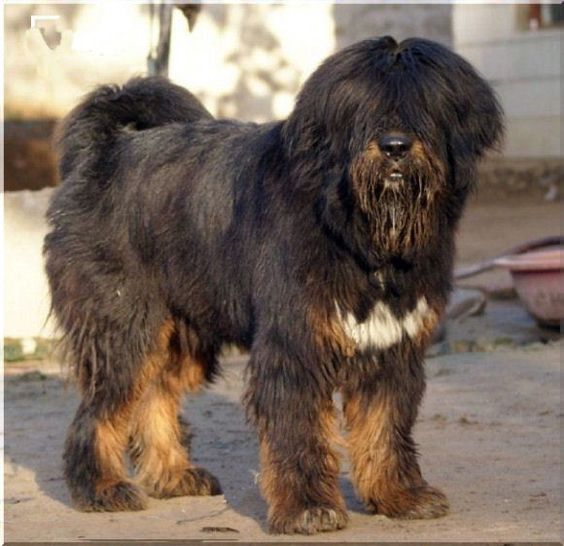 Meet the Tibetan KyiApso (pronounced Kee-Op-So), said to be one of rarest breeds in the world. In Tibetan, “kyi” means dog and “apso” (as in Lhasa Apso) means “bearded,” and some sources say the breed also goes by the name, “Bearded Tibetan Mastiff.” This large (between 24-27 inches and weighing just under 100 pounds) dog is described as fast, athletic, extremely engaging, and playful. The November 1993 issue of Dog World Magazine included an article about the dogs which included this quote from Saralouise Anderson  “…these dogs don’t come to live at your home––they invade your heart…They are deliberate in each of their actions, whether playing, whether guarding home and family. They are anxious to please… I have never had a dog with more human qualities.”

The breed originally used to guard livestock and property was believed by some to be a variant of the Tibetan Mastiff, but there are differences between the two breeds that include coat, ears and tails. There was once a Tibetan KyiApso Club, but it seems to have collapsed in 1999, and while one source writes that no litters were registered after 2000, we found puppies for sale on the Internet. Buyer beware. Do your homework, ask questions, and be aware of “red flags.’

We’ve given you a taste of the breed, now read this article to learn more.

2 thoughts on “The Bearded Tibetan Mastiff”