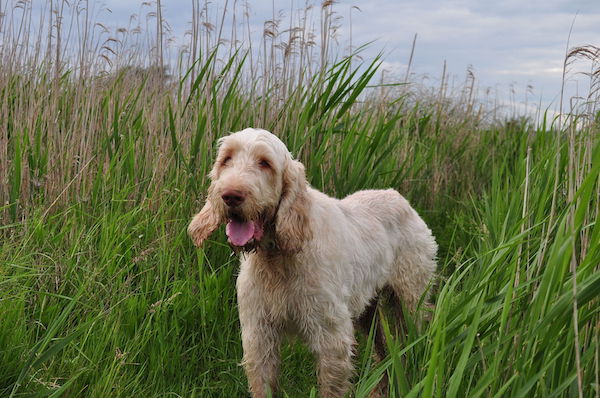 Bello e Bravo. It’s Italian for “beautiful and brave,” and it describes only one breed: the Spinone Italiano. Also known as the Italian Coarse-haired Pointer, “Spinners” originated in Italy out of ancient Italian ancestral dogs crossed with what some believe were coarse-haired Italian Setters, the White Mastiff, and perhaps French Griffons. This terrific breed is known for its superior nose and ultra soft mouth. Its topline, however, is less understood.

From the Spinone Italiano standard: “The topline consists of two segments. The first slopes slightly downward in a nearly straight line from the withers to the eleventh thoracic vertebrae, approximately 6 inches behind the withers. The second rises gradually and continues into a solid and well-arched loin.”

Put another way, a break in the topline is perfectly acceptable for this breed, and if one isn’t familiar with this facet of the breed, they might erroneously think that the dog is swaybacked. It’s not!

One of our favorite anecdotes about this breed is about a Spinone named “Fire,” aka BISS CH Risky Business Pistol’s Fire CD, JH, because she epitomized a purpose bred dog.

Fire had an NAVHDA (North American Versatile Hunting Dog Association) NA (Natural Ability). She won the Eukanuba Award as the Top Spinone in 2003. She also won Best of Breed at the Spinone Club of America National Specialty in 2004 and 2005. In pursuit of her conformation career,  she traveled the USA winning numerous Best of Breeds across the county. She was invited to the Westminster Kennel Club show 2003-2007, winning Best of Opposite in 2005.  In 2006 she was invited to the Raduno in Italy where she won her class as the Best Brown Roan Bitch.

This flat out gives us goosebumps.

Though “Fire” was a survivor of both Erlichiosis and cancer, sadly, she could not beat old age. We thank John D. Kreger who was the source for Fire’s story, and who drew for this incredible drawing and for sharing her story. .

Image from Wikicommons and shared under the Creative Commons Attribution-Share Alike 2.0 Generic license.