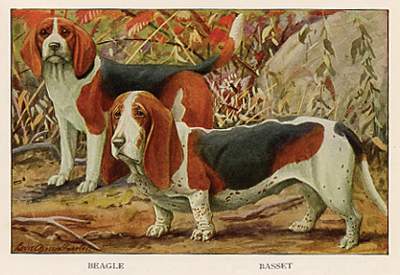 One wouldn’t think there would be more than one way to interpret “Bench-Legged Beagles,” but in reading about the hounds that General Lafayette sent to George Washington for pack hunting in America, we dug a little deeper to learn more and found additional references.

The dogs that Lafayette sent to Washington were called “Old Virginia Bench-Legged Beagles” obtained from France. While some people believe that these particular dogs factored into the history of the Basset Hound, others find that to be unlikely because today’s Basset is larger and heavier than many of the French basset types. They point out that Washington died several decades before the Basset Hound evolved from a blend of Basset Artesian Normand, Termino Hound (a Yugoslavian Tricolored Hound), hounds belonging to the Comte le Couteulx de Canteleu, and maybe even bloodhound.  They speculate that the Lane Basset and the Basset Bleu de Gascogne may have had more to do with the “Old Virginia Bench-Legged Beagles” than the latter had to do with Basset Hounds.  But we’ve digressed.

We’ve seen the term, “Bench Beagle”  used in regards to the height of a Beagle, or more specifically, a 13″ Beagle. This was a popular phrase used years ago to describe the smaller Beagles. Sadly, substandard breeders also use the description, “bench leg Beagle,” to describe a Beagle whose front legs are crooked and have turned-out feet (what some would describe as “bow-legged”).  This is a defect that often happens when someone is breeding for a “pocket Beagle,” a dog (and marketing ploy) that falls under the “no such thing” column.

Pocket Beagles existed back in the 16th century when Queen Elizabeth I kept Beagles small enough to be carried in a glove or gauntlet. Pocket Beagles are not a special size recognized by the AKC, and breeding for size alone isn’t just a recipe for disaster, it is a disaster as illustrated by “bench leg Beagles” whose front legs are often shorter than their back legs, and deformed as well. Beware of the “breeder” who boasts that this is a desirable appearance.

The image seen here is not intended to illustrate any of the dogs mentioned above, but is used because it shows a Beagle and Basset Hound in the same image. “Basset Hound and Beagle” is a presumed reproduction of a 103 year old print and is available for purchase here.

One thought on ““Bench-Legged Beagles””