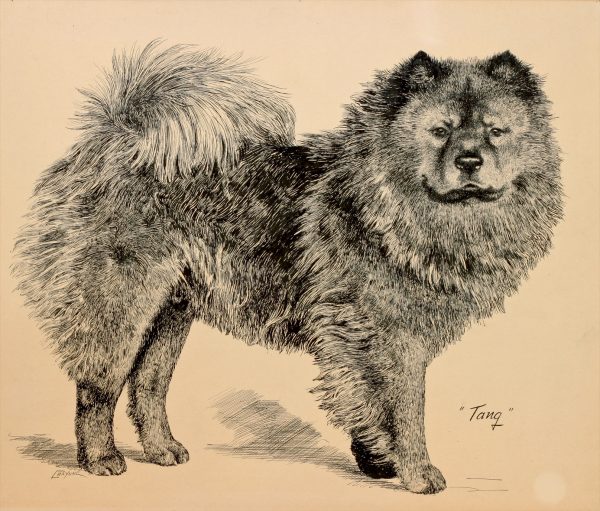 One can only imagine what a general public thought when seeing its first Chow Chow. The first account of the breed in the west was in 1781 (though some sources say it was 1789) when Reverend Gilbert White described a pair of Chows that his neighbor, a member of the East India Company, had brought to home England from India as “curiosities.” White makes mention in, “The Natural History and Antiquities of Selborne” of a young gentleman who, ‘…brought home a dog and a bitch of the Chinese breed from Canton, such as are fattened in that country for the purpose of being eaten … with coarse bristling hair on their backs … their hind legs were unusually straight without any bend at the hock or ham, to give them an awkward gait when they trotted … their eyes were jet black, small and piercing; the inside of their lips and mouths of the same colour as their tongues blue.’

Given the time period, gun dogs and terriers were probably the norm, not a dog with a blue tongue that resembled a bear. We cringe at the thought of a dog being displayed in a zoo, but times were different, and that’s exactly what happened when several Chow Chows were imported to the London Zoo in the early 1828 as “wild dogs of China” and displayed as “Black-Mouthed Chinese Dogs.” The dogs became popular and piqued the interest of Queen Victoria who fancied them as pets. As with most of the breeds that Victoria took under her wing, the dog got great attention, but accounts vary about the dog’s life. Some say the queen took the dog everywhere she went, while others describe the Chow Chow as a sad creature that lived a long, lonely life in a large cage at Windsor.  We hope it’s the former, but be that as it may, by 1895, an English breed club had been established presumably putting an end to Chow Chows living behind bars.