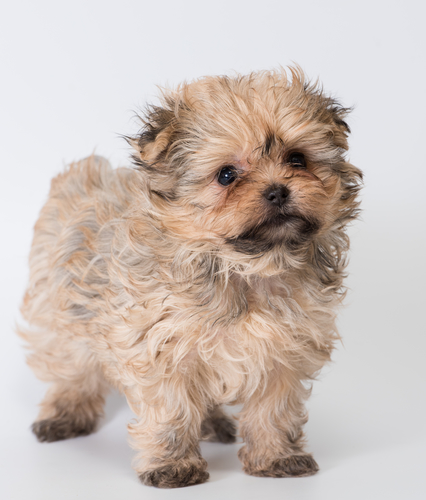 This delightful creature is a Russian Tsvetnaya Bolonka, a breed whose roots date back to at least the early 18th century. History tells us that King Louis IV of France presented the ancestors of Bolonki (the plural form) as gifts to Russian nobility, dogs that had migrated to Russia with Napoleon’s army when they were known as the French Bolonka.  After Napoleon’s army retreated, a few of the breed remained in Russia and become the foundation stock for the present day Russian Tsvetnaya Bolonka. So that you know, “Bolonka” means “lapdog” and Tsvetnaya Bolonka means “colored lap dog.”

These loving and affectionate charmers are sometimes called Bolonka Zwetna, and they’re quickly gaining such a following as to be called, “the dogs of the 21st century.” It’s getting a bit easier to find this uncommon breed, but before 2002, Bolonki could be located only occasionally in the United States. After extended and back-and-forth negotiations with the Russian Kennel Federation and the President of the National Russian Bolonka Club with agreements to honor and maintain the standard of its home country, the first Bolonka was imported from Russia by Candace Mogavero.