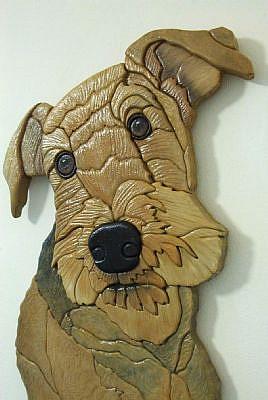 The Irish Terrier (Brocaire Rua in Irish) is the raciest member of the terrier group, so described because of its longer body and legs than other terriers. It was first introduced to the public in 1875, and a mere 25 year years later, it became the fourth most popular breed in England.

Irish Terrier painted by Intarsia Art by Gina Stern. Get more information about this piece and how to acquire it here.