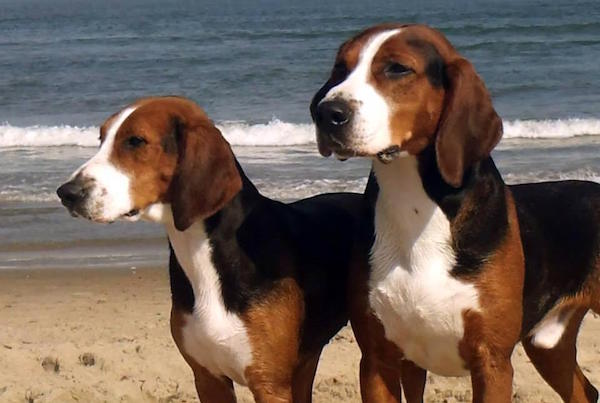 Hound breeds have been known in Sweden only since the 16th Century, and up until 1789, hunting with them was a privilege limited to royalty and the wealthy, and everyone else was prohibited by a ban.

When the ban was lifted and farmers were given permission to hunt, the hounds that had been forbidden to them (called stövar in Sweden) became popular. The origin of these dogs wasn’t Swedish, however. The dogs had been imported from western and middle Europe, and crossbred in Sweden leading to a variety of “breeds,” none of them bred according to a breed standard.

Enter Count Adolf Patrik Hamilton, a Swedish cavalry officer born of a noble family.  Sources disagree about the dogs he used to create the breed that eventually bore his name, but Atlas of Dog Breeds of the World, authors Bonnie Wilcox and Chris Walkowicz, write that Hamilton imported German hounds and bred them with British bred Foxhounds or Harriers, possibly through family ties since Hamilton was of English and Scottish ancestry. The dog he developed was originally known as Swedish Hound, but in 1921 the breed was renamed the Hamiltonstövare to honor its breeder who, as an aside, was also the founder of the Swedish Kennel Club.

The Hamiltonstövare is a hunting dog, but unlike many other hounds, it hunts alone or in a pair, not in packs.  Its hunting style also differs from other hounds in that it circles the game and pushes it towards the hunter with a high pitched bark,  important to indicate his location.

Today, the breed can be found in most European countries, as well as in Canada and the United States, and is said to be highly valued in its native land, but according to a chart found at the bottom of this page on the Nordic Kennel Union’s website, breed registration numbers are declining in Nordic countries. We hope this troubling trend can be reversed, and that this terrific breed is discovered by more people interested in an intelligent, happy and extroverted breed. The beauties you see here belong to a friend of National Purebred Dog Day, Ashley Hammock‎. They are UKC CH Kilcavan Alice’s Adventures CGC CGCA and UKC CH Kilcavan Captain Flint CGC.

To read an impressively comprehensive piece about the breed written by Ria Hörter in 2013, go here.