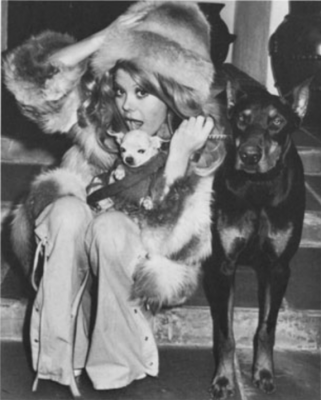 There were several celebrities who appeared on the Tonight Show frequently; the legendary Bob Hope appeared 131 times, more than any other guest in the history of the show, though he was allegedly Carson’s least favorite guest. Other “frequent flyers” are names today’s youth wouldn’t know: Joey Bishop,  Joan Rivers, Bob Newhart, Jerry Lewis, and others.

Another frequent guest (with forty-five appearances) was Charo, and while a young generation probably isn’t familiar with her, they should be because Charo opened doors for Latina actresses like Sofía Vergara, Salma Hayek and Eva Longoria.

In her day (the 1970s and a very different time), Charo was a “walking suggestive joke,” or as some put it, a legend and punchline. Beautiful and sexy, Charo (short for Rosario) made the most of her attributes and felt bad about it all the way to the bank. In later interviews, Charo admitted not knowing when she became a caricature, nor did she care. Still, she had to know what people were thinking when she did her “Cuchi Cuchi!” shtick:

Her bombshell persona of a curvaceous, fast speaking comedian (Bette Midler once joked that she had to give up speed because she finally started to understand what Charo was saying) carved out a long career independent of her marriage to famous bandleader, Xavier Cugat (a marriage she described as essentially a business deal).  All this said, people underestimated this savvy, self-made woman.

Her present net worth is estimated to be approximately $12 million. She speaks Japanese.  She’s published several successful books. And then there’s the guitar…..

She began playing guitar at the age of 9 and trained under the world-famous master of Flamenco guitar, Andrés Segovia.  Charo was twice voted the “Best Classical Flamenco Guitarist in the World” by Guitar Player Magazine, and below, you can hear why (click on “Watch this video on You Tube):

Dogs. You knew we’d get around to the subject eventually.

For starters, Charo’s famous “Cuchi Cuchi!” line is credited to a dog she had as a child. Named, “Cuchillo,” or “Cuchi” for short. 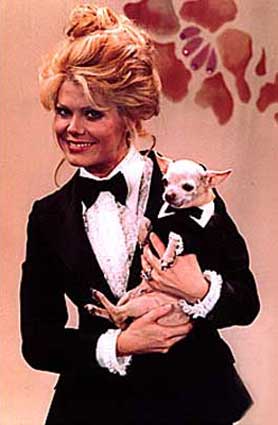 The mixed breed’s back problem caused Cuchi to wag his back end “fore-and-aft” instead of side-to-side like most dogs. It was this movement that Charo started to imitate as a kid, and which later came to serve her well in her career.  During her marriage to Cougat, Charo came to be associated with Chihuahuas through her husband whose constant companion was “Pepito.” She would later own “Toro,” a Doberman Pinscher, and “Delilah,” another Chihuahua, both seen at the top of the page.

These days, Charo continues to entertain her fans through social media. She uses her Instagram and YouTube pages to connect with people all around the world, finding that these connections have helped her get through the tragic suicide of her husband, Kjell Rasten in 2019. Charo says she is inspired to support others who may be suffering from similar loss.  Her dogs of late are “Rocco” and “Canela,” a Great Pyrenees and Yellow Lab, respectively.

We learned at the very last minute that Charo is a member of PETA, and while we support her stand against animal cruelty, we cannot endorse PETA as the vehicle to combat it.