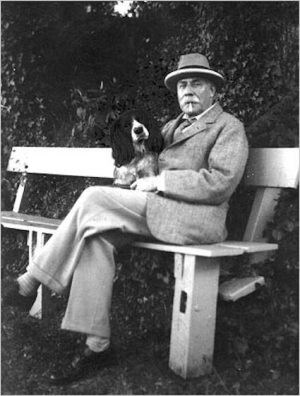 You may never listen to Elgar’s “Enigma Variation” the same way again, but first, you have to hear it (scroll down):

Written by Sir Edward Elgar, an English classical music composer who died in 1934, the “Enigma Variation,” has fourteen variations on an original theme, and is said to have a hidden melody. The piece has been recorded over 60 times – maybe in an effort to find that melody? (kidding).

Legend says that the music (especially the 11th variation) was inspired by a friend’s Bulldog named, “Dan.” While walking along the Wye River, Dan is said to have fallen into the water, paddled upstream, and emerged. The music is supposed to represent this incident.

Though Elgar was a dog lover who had owned dogs before his marriage, his wife was said not to be keen on them, and wouldn’t allow one in the house. After his wife’s death, Elgar made up for lost time. First came “Meg,” an Aberdeen Terrier. then “Marco,” a spaniel (believed to be seen here with his master), and finally, “Mina,” a Cairn Terrier.