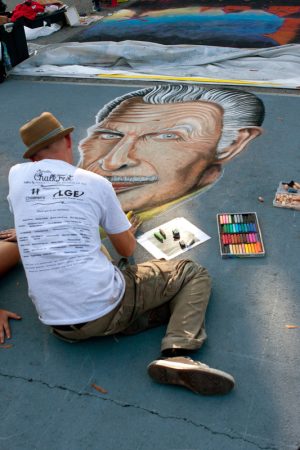 “Darkness falls across the land…
The midnight hour is close at hand..
Creatures crawl in search of blood…
To terrorize y’all’s neighborhood…”

If reading the aforementioned verse doesn’t ring a bell for you, scroll down and try hearing it instead:

The inimitable voice and demonic laugh in “Thriller” belonged to the late Vincent Price.

Long regarded as a legend in horror movies, it is a fact that fewer than a third of the more than 100 movies Vincent Price made were horror films. Nor was “Thriller” his first “gig” in pop music. Vincent Price voiced “the Curator” on the song “The Black Widow” from Alice Cooper’s 1975 solo record,  Welcome to My Nightmare.

Price lending his voice to the Thriller soundtrack (which has sold more than an estimated 50 million copies worldwide) was an unexpected role late in his life, and it was due, in part, to Michael Jackson’s interest in horror movies, and to the fact that Thriller was produced by Quincy Jones who was married to Peggy Lipton who knew Vincent Price. 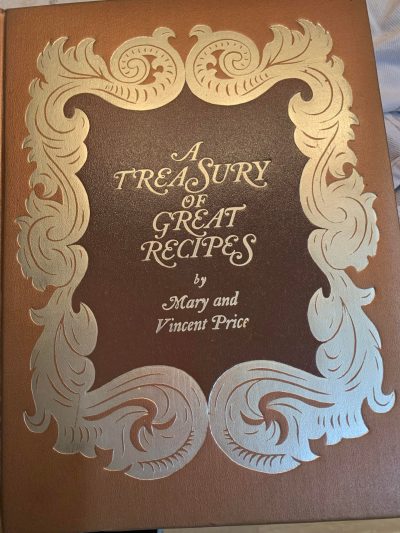 Photo shared by Dandie Dinmont Terrier fancier, Sheridan, who owns the book and has committed to memory the recipes for Coquilles St Jacques and the Breast of Chicken au Champagne

Already aging at the time, Price performed the Thriller sequence in just two takes, and it would be easy to keep writing about Vincent Price’s part in Thriller, but that would lead us astray from the subject at hand – Vincent Price and his dogs. Still, we want to touch upon how interesting a man Vincent Price was before we get to his dogs.

His grandfather invented the first cream of tartar-based baking powder;

He was connoisseur of fine art, an interest that began when Vincent was twelve-years-old and spent a year earning enough money to buy an original etching by Rembrandt, “Two Nude Models, One Standing;”

He was a gourmet cook and wrote a number of cookbooks including his first one, A Treasury of Great Recipes, penned with his wife, Mary. He even had his own cooking show;

He was a roller coaster fanatic and narrated the first documentary to showcase not only the history of coasters but of amusement parks in general;

Price was an early advocate for Native Americans and was appointed to the Department of the Interior’s Indian Arts and Crafts Board in 1957. He was also charged with the operation of two museums dedicated to Native American art and helped develop policies to promote the economic welfare of Native peoples through traditional arts and crafts.

Those are just a few high points of a remarkable life.  Throughout it all, he was a dog owner, most of them purebred dogs.

In college, Vincent owned Lisa, a Dachshund. When he was living in New York City, around 1935- 1937, he had Johnny, a white English Bulldog with brown patches.  Near the end of the 1940s, Vincent was sued for over $13,000 by 60-year-old Charles F. Benjamin when his beloved mutt, “Joe,” ran into the street and upset a bicycle. The bike was ridden by Benjamin who broke his collarbone in the incident, but by all accounts, the situation was resolved successfully. Nothing dissuaded Vincent Price, however, from adoring this mixed-breed dog he described as being “built like a Duncan Phyfe table.”

In 1961, Price wrote a book about Joe (illustrated by Leo Hershfield) that was called, appropriately enough, The Book of Joe. It began like this: “This is a tale of how I went to the dogs or, to be numerically correct, to the dog. Now please do not expect this book to end with a glorious proclamation of rehabilitation. Not a chance. After fourteen years I’m incurably hooked on, intoxicated by, and addicted to – my dog Joe.” It was a hard book to find for a long time and much sought after, but it was re-released in 2015.

Joe died in 1964 at the age of 17, and from that point on, Vincent, an avowed animal lover, owned a series of critters, from a cat, pigeons, goldfish (that he rescued from a studio film set) and a tortoise, to several purebred dogs. There was Prudence, a gray Poodle, Paisley, a Skye Terrier, and Puffie, a Pug (and Vincent’s special pal for a long time while his daughter, Victoria, was young).  Sam was a Lhasa Apso, and Tiggy, Maile, and Fendi were all Chihuahuas. Two Schipperkes, Wilhelmina and Kiki, were also part of the Price household

Vincent Price died of lung cancer and emphysema six days before Halloween in 1993 at the age of 82.  People magazine eulogized him as “the Gable of Gothic,” but we remember him as a renaissance man who loved dogs.