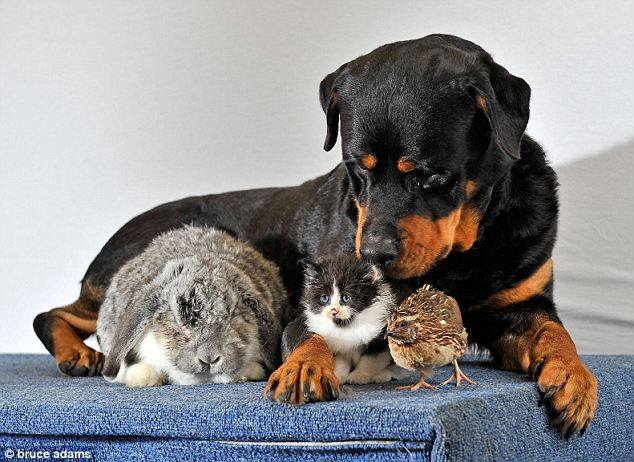 It’s never a good idea to pigeon hole an entire breed based on pop culture reputation, some Internet list (like a few of the sketchy ones we’ve shared here), or one person’s experience. “Dave” is a fine example.

In 2011, Dave was discovered to have a strong nurturing nature when his mistress brought home an unwanted French rabbit. “Dave just walked over to him and started licking him to clean him,’ said his owner, Amanda, who ran a pet shop in Blackpool, UK.

One might not expect a ten-stone Rottweiler to nursemaid orphaned bunnies, birds, puppies and kittens, but Dave did (a “stone,” by the way, is a unit of measure equal to 14 pounds). By one count, Dave “raised” over four ducks, three geese, five rabbits, 13 kittens, five puppies, and countless new-born chicks.

Despite Dave’s traumatic upbringing by a horrible first owner, the dog remained amazingly good-natured and was voted Britain’s most inspirational dog in a contest sponsored by worming specialists, Drontal. The online contest attracted over 6,000 entries, and 265,515 votes later, Dave was the hands-down winner. Dave received a cash prize for extra snacks, beds and a doggie jacket. Show us your loving Rotties!