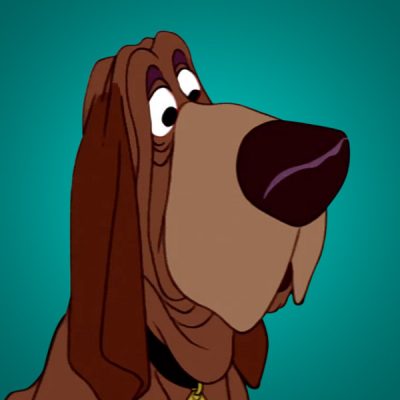 Walt Disney clearly had a soft spot for Bloodhounds (and who doesn’t?).  The breed appeared in many Disney classics, including Lady and the Tramp I and II (“Trusty”),  The Aristocats (“Napoleon” and “Lafayette”), Oliver and Company (“Trusty” making a cameo appearance), House of Mouse, Fox and the Hound (“Copper”), 101 Dalmatians (“Towser”), The Princess and the Frog (“Stella”), The Great Mouse Detective (“Toby”) and our favorite Disney movie, Cinderella, and its 2002 sequel. Who remembers the name of the Bloodhound in Cinderella?

Disney’s interest in the breed started early. “Back in the early ’30s, we were doing a story where Mickey Mouse escaped from a chain gang,” Walt Disney once explained, referring to The Chain Gang (1930). “We needed a bloodhound. “Pluto” got the part and turned out so well, we used him twice.” Pluto worked out so well that Disney made him a fully licensed member of his stable of stars. Pluto appeared in 24 Mickey Mouse films before getting his own series in 1937. As for his name, it’s always been the source of speculation. In 1930, a name for the newly discovered ninth planet was suggested by an eleven-year-old schoolgirl, Venetia Burney. In 2006, Venetia remarked: “The name [Pluto] had nothing to do with the Disney cartoon. Mickey Mouse’s dog was named after the planet, not the other way around.” Some sources claimed that the Disney studio named Pluto after the planet (not the mythical god of the underworld), but it’s not been verified. Disney animator Ben Sharpsteen also was quoted as saying, “We thought the name [Rover] was too common, so we had to look for something else. We changed it to Pluto the Pup, but I don’t honestly remember why.”

As for Cinderella, the Bloodhound was named “Bruno,” a gift to a young Cinderella from her father. After Cinderella’s father died, “Bruno” and Cinderella grew up together under the hand of Cinderella’s evil stepmother, Lady Tremaine, who has two daughters Anastasia and Drizella. And then there’s the cat, “Lucifer,” whom “Bruno” hates because of the way he treats Cinderella. His lack of patience for “Lucifer” usually gets him banished out of the house, but at the end of the movie, “Bruno” gets his revenge by scaring “Lucifer” out the window.  We like cats, but “Lucifer” had it coming.

Just before the ball scene, “Bruno” is transformed into a footman by the Fairy Godmother so that Cinderella can attend the ball. Good dog!