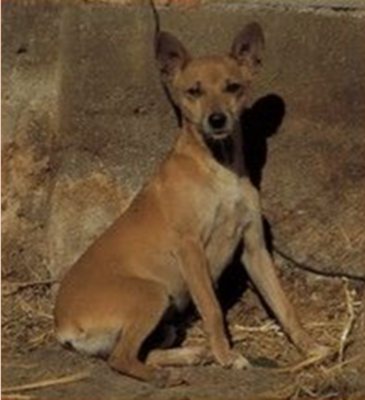 We continue our series on the five ratting breeds native to Spain (breeds we’ve already covered follow this post), and remind gentle readers that these breeds are the Valencian Ratter, Andalusian Ratter, Majorca Ratter, Murcian Ratter, and Basque Ratter.

Meet the Basque Ratter. Of its many nicknames, we’ve taken a shine to the “Little Villain of Las Encartaciones,” though “door dog” (so named for its speed in alerting the arrival of strangers) is a close second.  The breed’s Spanish name is Ratonero Vasco, though we’ve also seen Villanuco de Las Enartaciones. The problem with using the latter name is its similarity to another breed, the Villano de Las Encartaciones, but extra letters in Villanuco make a huge difference because one is a small ratter, the other is an imposing dog used for big game hunting!
Native to the regions of Las Encartaciones, Cantabria and northern Burgos in Spain, the Basque Ratter is one of five Basque dog breeds, the others being the Basque Shepherd Dog, the Erbi Txakur, the Pachón de Vitoria and the Villano de Las Encartaciones.
Sadly, it is also said to be in a precarious state of conservation. With an estimated 50 dogs left in existence as of 2009, not for nothing did Dr Pippa Elliott of the University of Glasgow describe the breed as elusive as a ghost, insubstantial as a shadow. We daresay it is the rarest of the five Spanish ratting breeds, and for that reason, photos of the breed are hard to find. Our image here was found on a Spanish website that we hope will forgive us for sharing their image.

Bodega* Mice, and the Breed that “Loves” them