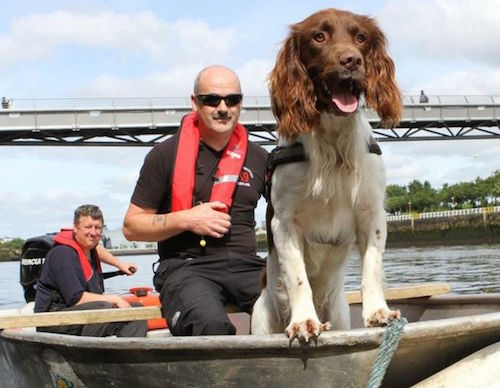 Three years ago, we reported that an English Springer Spaniel named, “Barra,” was the only dog in Scotland that could detect bodies under water, an important, if not grizzly talent that helped solve crimes and bring closure to families in agony. Guess what? Barra is still at it, and now she has company.

Six years ago, Iain Marshall had never even owned a dog, let alone looked for a dead body, but as a boatman on the Clyde for the Glasgow City Council, he’d seen his fair share of bodies being dragged from the river. After reading an article in a rescue magazine about dogs able to find bodies under water, Marshall found his calling. Iain acquired “Barra,” who qualified as a human remains land, shoreline and submerged detection dog and handler. She is still the only dog in Scotland who can trace bodies submerged under water, but she now has an understudy in “Eriskay.” Both dogs aren’t just working dogs but much-loved family pets.

It has taken thousands of pounds of Marshall’s own cash to train the pair, and despite his investment, he refuses to charge families who turn to him in their time of despair. “It is never pleasant to come across a body,” Iain confesses, but quickly adds: “But it means the worry for someone out there comes to an end.” For more on this story, read this.