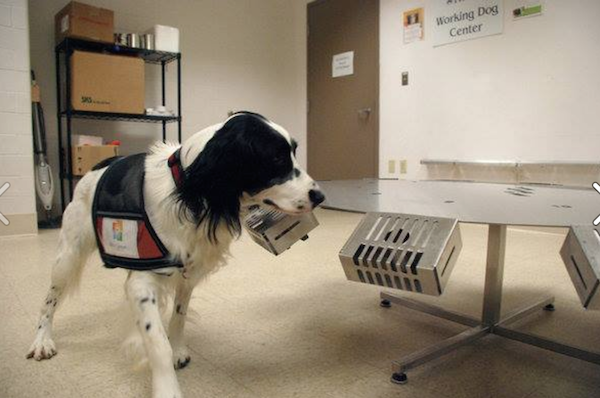 Nearly 137,000 people viewed this post from 2015 at a time when we were half the numbers we are now, and over 1,000 people shared it on Facebook. As we repopulate our website with popular posts from our earliest days, this one was a “no-brainer.”

Attached to a wheel in the center of a floor are twelve small cups that contain blood samples. Only one contains the blood sample from a patient fighting one of the most deadly diseases in women: Ovarian cancer. A black-and-white English Springer spaniel whose tail never stops wagging runs around the wheel smelling each cup, and suddenly, he stops and places his paw on one of them. He sits down.

“McBaine” was one of four dogs enrolled in an innovative study that is training dogs to identify ovarian cancer by its smell. Researchers want to learn exactly what it is the dogs are detecting in the cancer with the goal of inventing a diagnostic device that could mimic the dog’s nose.An ovarian diagnosis usually comes at a very advanced stage because there are so few symptoms Perhaps one day, such a device would give doctors a tool to find ovarian cancer long before victims even know they are sick. The notion of such a thing, however, emerged in 1989 when the prestigious British medical journal The Lancet published a five-paragraph letter titled “Sniffer dogs in the melanoma clinic.” In the letter, two physicians at King’s College Hospital in London described the case of a forty-four-year-old woman, who came into their clinic with a lesion on her left thigh. She told them she made the appointment because her dog, a Doberman–border collie mix, was constantly sniffing a mole on her leg.

The dog, the physicians wrote, “showed no interest in the other moles on the patient’s body but frequently spent several minutes a day sniffing intently at the lesion, even through the patient’s trousers.”

One day the woman donned shorts, at which point her dog tried to bite the mole off completely. That’s when she decided she should get it examined. The object of the dog’s obsession turned out to be a malignant melanoma. The dog had saved the patient’s life because when she came into the clinic, the tumor was so small they could easily treat it. She was cured. Dogs like McBaine are seeing if they can shave some time off the process.