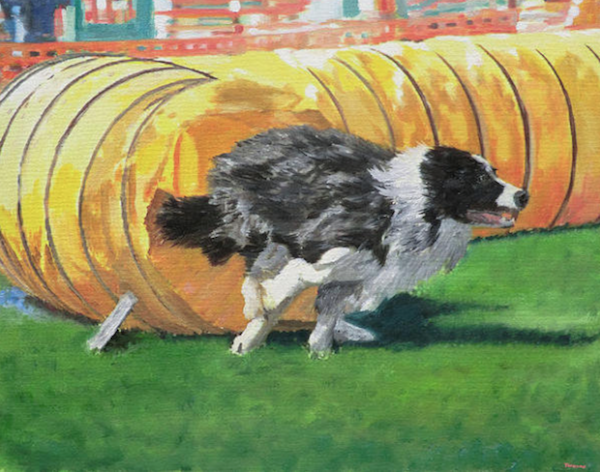 In 1990, the first United States Dog Agility Association title was earned by a Portuguese Water Dog named, “Cooper.” Just nine years later, a California dog made history by earning the first AKC MACH title. Can you name that dog‘s breed? (the answer is at the end).

Agility got its public start as a demonstration to fill the gap between the obedience championship and the beginning of group judging at Crufts dog show in the UK in 1978.  It was an immediate hit.

How agility has grown. Brenna Fender wrote in a wonderful overview of the sport, “Early agility exhibitors were truly pioneers of the sport. There were no big-name trainers, websites, books, or videos, and no real instructions on how to play this game. Now entire schools of thought on reinforcement, correction, and handling have been promoted.”

Answer: A Shetland Sheepdog named “Wyatt” made history by earning the first AKC MACH title in 1999. But enough about everyone else. Show us your agility dog in the comments section below (and name his or her breed) and let’s see how many different breeds we can show off in this post!

“Agility Tunnel” by Brad Thomas is available as a print here

7 thoughts on “The First AKC MACH Title: What Breed?”