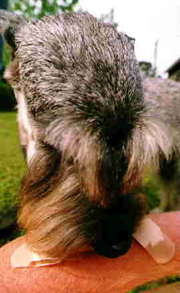 It’s hard to believe now that we ever wondered if dogs could detect cancer. Studies have confirmed that trained dogs (and not always trained, truth be told)  can detect melanomas by sniffing skin lesions, prostate cancer by smelling patients’ urine, cancer through breath samples, as well as bladder and kidney cancers.

Absolutely, dogs can detect cancer. They can even smell it “in situ,” or at stage zero.

Back in 1996, we didn’t know. Back in 1996, a Florida dermatologist, Dr. Armand Cognetta, was intrigued by an article he’d read about a British woman whose life was saved by the persistent attention her dog had given a malignant mole on her leg. Before reading the article, Cognette had long thought that there had to be a better way to detect cancer, and maybe dogs were that way.

George was challenged to find a test-tube containing a melanoma sample. George did well.

George’s accuracy soon topped 99% on tests like the one challenging him to find a cancer sample in one of ten holes in a long box. George’s training shifted to Kim Edwards, a nurse at Tallahassee Memorial Regional Medical Center who got involved because of a family history of skin cancer. She’d put bandages on her body, sometimes with a cancer sample underneath on of them. In over 40 trials lasting over a year, George reached nearly 100% accuracy in finding the right bandages.

In the Spring of 1997, George was featured on Unsolved Mysteries with his owner/trainer. That same year, he was also featured on the program, Ultimate Guide Dogs, on the Discovery Channel.