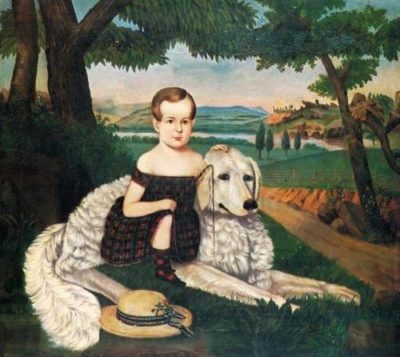 It’s worth noting that the Great Pyrenees is a lupomolossoid as opposed to a molossoid.
In English?
A molossoid is more “mastiffy” with heavier bones, pendant ears and a shortish muzzle. A lupoid is the least mastiff-like with a longer muzzle, height, and rangier build, and, some would say, is more wolf-like. A lupomolossoid type is a “meeting” of the first two. These dogs are generally heavier than the lupoid type, but lighter than molossoid, and with features of both.

The dogs that take their name from the Pyrenean mountain range in Europe were most likely descendants of mountain flock guard dogs that originated some ten or eleven thousand years ago in Asia Minor. They arrived with shepherds and encountered indigenous people of the Pyrenean Mountain area, one of which was the Basque; Over hundreds of years, and within the isolation of mountains, the dogs developed the elegance, majesty, and guarding characteristics that made the Great Pyrenees so valued.
By the early 15th century, French documents told of “Great Dogs of the Mountains,” and by the 17th century, the Great Pyrenees was adopted as the Royal Dog of France by the Dauphin in the court of King Louis XIV, though they were referred to at the time as Le Chien de Montagne des Pyrenees or Le Chien des Pyrenees. The dogs were so highly regarded and coveted by nobility for their exceptional sense of smell and sharp eyesight that each dog was counted as an equal to two men.In 1850, Queen Victoria owned a Pyrenean Mountain Dog, and somewhere between 1885-86, the first Great Pyrenee were registered with the Kennel Club, and shown at the Crystal Palace.Sadly, by the early 20th century, the breed had deteriorated. Natural predators were vanishing, and this left less work for the Great Pyrenees. To add insult to injury, the dogs were also bred with other breeds which diluted the pureness of the gene pool, while unscrupulous breeders were selling the dogs billed as “purebred” to naive tourists. It was a perfect storm that led to a decline in breed numbers.

To revitalize interest in the breed and restore it to its former glory, an effort was made in 1907 to find “faultlessly typical” specimens, but two world wars made it necessary to “reboot” efforts to get the breed back on its feet from the devastating effects of war and occupation. Several dogs were imported into North America around 1931 just before the continent was closed by World War II, and in 1933, the AKC recognized the Great Pyrenees.

Today, the breed is valued as an elegant, calm, gentle giant. The dogs retain a strong guarding instinct used to protect their loved ones, particularly children. They are extremely intelligent, and are said to have an almost prescient sense of danger.

One thought on “Great Pyrenees: Lupomolossoid”