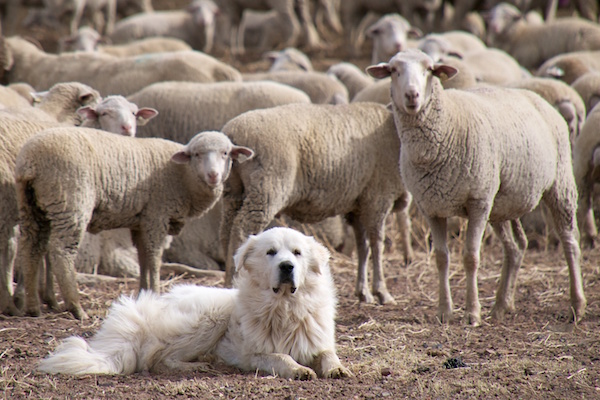 The Great Pyrenees is not bred to be a guard dog, not of people, anyway. His or her job is to guard flocks at night when his shepherds are sleeping, and things that go bump in the night lurk about. Things like predators with teeth. Scaring off critters that don’t belong anywhere near his flock is typically done by barking, not attacking, and since Pyrs have very sensitive hearing that empowers them to pick up on the faintest sounds from miles away, their “woof” means something, and will continue to mean something until the threat is gone. Savvy Pyr owners know this doesn’t end when the sun goes down. In fact, it increases. The Great Pyrenees is nocturnal by nature (particularly when kept outside) to best protect his flock during the hours his hoofed charges are most vulnerable. Livestock owners appreciate this quality, but just as there are difference between a Jeep, Volkswagon, Saab and Ford Fusion (even though they’re all cars), each LGD breed (Livestock Guardian Dog) brings something unique to the table, so to speak, and owners of livestock would do well to investigate each of them to get the best fit for their needs. To do less is unfair to the dog, and unfair to the stock.