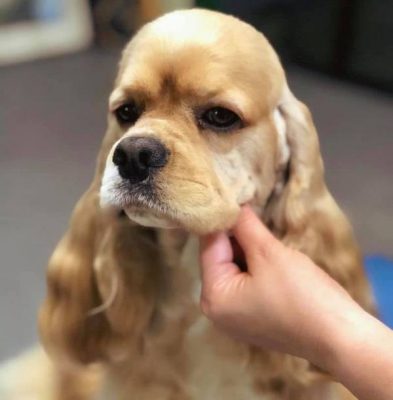 The smallest member of the Sporting Group, the American Cocker Spaniel, is also one of the eight sporting breeds that calls for soft eyes or expression (the others being the Clumber Spaniel, Brittany, Irish Setter, English Cocker Spaniel, Sussex Spaniel, Welsh Springer Spaniel, and Spinone Italiano).  A versatile, charming little dog, Cockers are the only breed that can cause one’s blood pressure to lower simply by gazing into the dog’s eyes.

And yes, we just made that up, but it feels true.

This soft, appealing expression is literally a breed standard, and to bring attention on the dog’s kind expression in a show ring, all “fussiness” is removed in favor of a clean look. Groomers and fanciers clip the back section of the skull close with a #10 or #15 blade going with the grain that follows the ridge where the head and neck meet, and from the top of the eye to the back of the skull.  The area above the ears, including about one-third  downwards, is clipped to accentuate the ear (and on a correct dog, one wants to draw attention to its placement which should be no higher than a line to the lower part of the eye). The space down the cheeks is clipped to produce a clean appearance.  Thinning shears blend the line of the crown and the shorter hair of the back skull.

An added incentive to grooming this way is to accentuate the Cocker’s cleanly chiseled and refined head which is unique: Rounded but not exaggerated and with no tendency toward flatness, the eyebrows are clearly defined with a singular – and clearly pronounced stop that should fit the shape of one’s thumb as it’s placed between the eyes.  The bony structure beneath those eyes is well chiseled with no prominence in the cheeks.

It should never be forgotten that the Cocker Spaniel is a working breed, so it should look like it can easily carry a fair-sized bird. This calls for a broad and deep muzzle, square even jaws, and a nose of sufficient size to balance the muzzle and foreface.  For anyone with the chance to get one’s hands on a Cocker, the distance from the stop to the tip of the nose is one half the distance from the stop up over the crown to the base of the skull to be in correct balance. 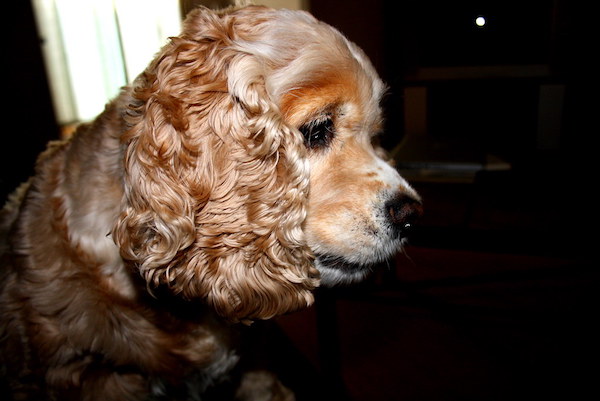 Lola, an American Cocker Spaniel, is not presented as a show dog, nor groomed for a show ring. Photo by explorewithmaya and shared under CC BY 2.0 license

Many people at a dog show are drawn to the Cocker Spaniel’s beautiful flowing hair, and it is something to behold particularly when the dog is moving out. In our view, however, failing to stop, behold, and admire the head of a typey Cocker Spaniel is to miss one of the breed’s best parts, and it’s little wonder that groomers take the time to groom it in a way that shows off this unique head.  When you see an ungroomed Cocker versus one prepared for a show ring, we suspect you’ll agree that one does a better job of signaling, “Look at my head” than the other.  Mind you, “ungroomed for the ring” does not equal “unloved,” as some owners lack the skill or interest in having their dogs groomed this way, but we did want to explain the reasoning behind why the American Cocker Spaniel’s head is groomed the way it is for a show ring.

P.S. We would like to replace the top image with another “head shot” photo of a show American Cocker Spaniel we can attribute. Contact us privately, full credit and links provided.