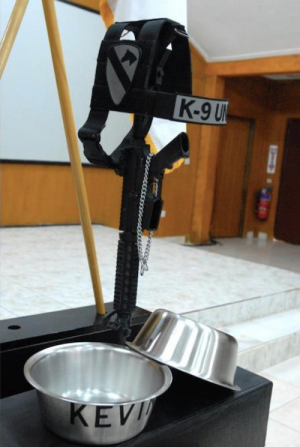 They are Doberman Pinschers,Black Russian Terrier, German Shepherd Dogs, and Belgian Malinois. They have been Airedales, Briards, Bouviers and Boxers. They’ve also been Labrador Retrievers, Irish Terriers, and Jack Russell Terriers. When WWII broke out, the only American military dogs were sled dogs that used to locate crashed pilots in Greenland, so they were Alaskan Malamutes, Siberian Huskies, American Eskimo Dogs and Chinooks. In the same war, they were Giant Schnauzers and Collies, but later, they were also Chesapeake Bay Retrievers and Golden Retrievers. They have all been soldier dogs, and these days if they dies in the service of their country, their bowls are placed upside down to symbolize that they won’t need them anymore, their collars and leashes are hung up in remembrance of them. If memorial is at a kennel, their kennel door is left open indicating they won’t be coming home. And finally, their handler reads a poem called “Guardians of the Night:”

Guardians of the Night

Trust in me my friend for I am
your comrade. I will protect you
with my last breath. When all
others have left you, and the
loneliness of the night closes
in, I will be at your side.

Together we will conquer all
obstacles, and search out
those who might wish harm to
others. All I ask of you is
compassion, The caring touch
of your hands. It is for you that I
will unselfishly give my life And
spend my nights unrested.
Although our days together
May be marked by the passing
of the seasons Know that each
day at your side is my reward.

My days are measured by The
coming and going of your
footsteps. I anticipate them at
every opening of the door. You
are the voice of caring when I
am ill. The voice of authority
when I’ve done wrong.

Do not chastise me unduly For
I am your right arm, The sword
at your side. I attempt to do
only what you bid of me. I seek
only to please you and remain
in your favor.

Together you and I shall
experience A bond only others
like us will understand When
outsiders see us together Their
envy will be measured by their
disdain.

I will quietly listen to you And
pass no judgment, Nor will your
spoken words be repeated I will
remain ever silent, Ever vigilant,
ever loyal. And when our time
together is done And you move
on in the world Remember me
with kind thoughts and tales,
For a time we were unbeatable,
Nothing passed among us
undetected.

If we should meet again on
another street I will gladly take
up your fight, I am a Police
Working Dog and together We
are guardians of the night.

Have you seen the movie, “Megan Leavey?” Based on a true story, it tells of the incredible bond that exists between the title character, soldier Megan Leavey, and “Rex,” the German Shepherd she’s partnered with. After training at Camp Pendleton, the two are deployed to Iraq, assigned to sweep suspect areas for potential hidden explosives in advance of the troops. Through countless dangerous missions and an IED bomb that injures both of them, the two build an incredible connection, and when they are separated, Megan moves heaven and earth to get her dog back. Hear the actors from the movie talk about their experiences, and their own dogs: