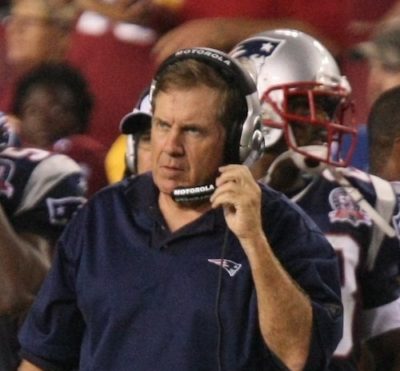 Bill Belichick is notorious for his taciturn nature and being anything but loquacious, but even if his New England Patriots lose in the Super Bowl this February 3rd, he still gets to go home to “Nike.” Nike is his Alaskan Klee Kai,  a breed developed to be a “mini-me” version of the Alaskan Husky, a racing breed in Alaska. While some have described the Klee Kai as “husky lite,” the name is actually Inuit for “small dog. In the video interview below, we meet Nike:

The Klee Kai was developed in the early 1970s in Wasilla, Alaska by Linda Spurlin was inspired to create the breed after seeing what looked like a miniature husky in Oklahoma. It was actually the offspring of an “oops” mating between a small dog and an Alaskan Husky at her brother-in-law’s home.  Enchanted with the dog, she asked to keep it, and determined to recreate it with a small scale breeding program that, it’s said, involved breedings between Alaskan and Siberian Huskies, with “just the right amount of smaller dogs of similar conformation” to develop her original stock; some sources speculate that she added the Schipperke and American Eskimo Dog to bring the size down without dwarfism.

Though the breed isn’t AKC recognized for the conformation ring, the Alaskan Klee-Kai can participate in AKC performance and companion events. The United Kennel Club accepted it in 1997.