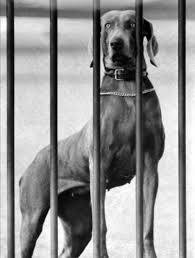 When it comes to breeds that have lived in the White House, the Weimaraner may have been a “one off.”  The dog was Heidi, and the president was Dwight D. Eisenhower.

By all accounts, Heidi was a personality. She was leery of the White House photographers, and never more so than when they tried to snap pictures of the First Lady, Mamie. On those occasions, Heidi would jump between her mistress and the camera, and if that didn’t work, she aimed for the photographers. Interestingly, Mamie initially didn’t like the idea of having a dog, but she and Heidi become great friends. Equally curious is that the press didn’t realize the Eisenhowers even had a dog, even though Heidi had been “running all over” the White House lawn for over a year. Once reporters caught on, stories about Heidi became quite popular.  One newspaper wrote that Heidi’s daily breakfast was two poached eggs on toast and two strips of bacon, which the White House called “ridiculous.” More accurate is that one of Heidi’s two daily meals was cooked ground beef mixed with kibble, she did sleep in a comfy basket on the third floor with full run of the White House and grounds, and during the day, she often got head scratches and belly rubs by the president in his office.

On the occasion that Heidi’s bladder failed her on a $20,000 rug in the diplomatic reception room, it was decided to let Heidi enjoy rural life at the Eisenhower farm in Gettysburg, Pennsylvania. Heidi reportedly thrived at the farm where she also enjoyed maternity leave.