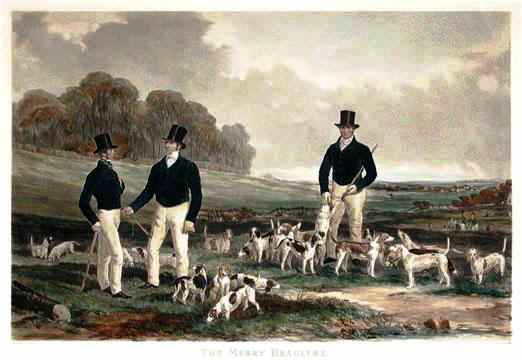 The clergy has had its hand in a few of our purebred dogs, most notably, Parson John “Jack” Parson Russell whose breed bears his name. The Beagle, too, was influenced by a man of the cloth. The very first work pack of Beagles in Great Britain was established by the Reverend Phillip Honeywood on 1830, and the good man also established a breeding program believed to have been the basis for the modern Beagle. Frustratingly, many early “dog men” didn’t keep records, and little is known about the other breeds Honeywood used in his program beyond North Country Beagles and Southern Hounds. Honeywood concentrated on producing dogs for hunting and eliminating the trend toward tiny Beagles, and his first efforts were known as Honeywood’s Beagles. By today’s standards, these were still small Beagles (10 inches at the shoulder), and they were pure white, and while there were other Beagle packs of the day (most notably, the ones belonging to Prince Albert and Lord Winterton), Honeywood’s pack was considered to be the finest of the three.  Honeywood’s dogs renewed interest in “Beagling” (hunting rabbits with Beagles), and his Beagles became so popular that his regular hunting party was sometimes called the “Merry Beaglers of the Meadows.”Some of these hunters three, along with a large pack of Beagles, was forever immortalized in a painting by Henry Hall titled “The Merry Beaglers (1845).
Others would come along and “fine tune” the Beagle,  people like Thomas Johnson (whose breedings produced handsome and skilled hunters that would ultimate  lead to two different breeds with distinct coat differences), and General Richard Rowett, the first to begin an organized breeding program of Beagles in the US.
“The Merry Beaglers” by Henry Hall (1845)