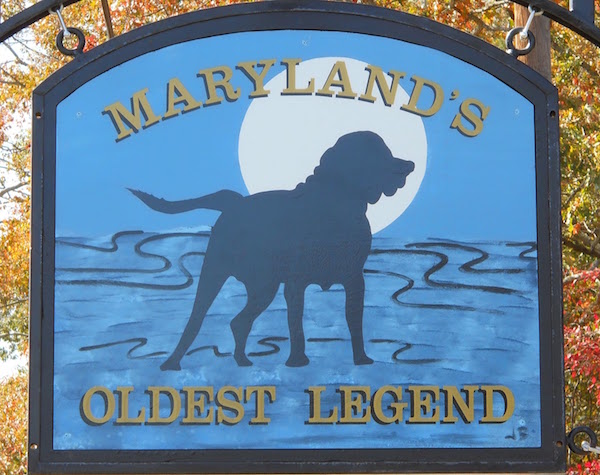 What may be the oldest ghost story in America involves a purebred dog, a legend that dates back to the 1700s.
As the story goes, on the night of Feb. 8th, Charles Howard Sims had “tied on a good one” in a tavern in Port Tobacco, Maryland. Charles might have been fine had he limited himself to quietly drinking in a corner with his Blue Tick hound, but ol’ Charles was a noisy drinker, and the more he imbibed, the louder he got. Much of the noise he made was bragging about the amount of gold he had, as well as having on him the deed to a piece of property.
After Charles left the establishment, he was attacked on Rose Hill Road by robbers who’d overheard his bragging, Henry Hanos and an accomplice. Charles went down swinging, his dog trying valiantly to save his master, but to no avail. The next day, townspeople found Sims and his hound lying on a rock – dead.
Hanos and his accomplice had buried the gold and deed under a holly tree, but when they returned to fetch it, they were attacked by the specter of a large blue dog.  Mysteriously, Hanos fell ill and died quite suddenly soon after. To this day, people say the dog watches over his master’s gold.  A few Confederate soldiers would agree because years later, they saw the ghost dog, too.
During the American Civil War, General Joseph Hooker maintained his headquarters at Chiccamuxen Methodist Church between 1861 and 1862. As an interesting side note, it’s said that his camps resembled brothels, and that the origin of the word, “hooker” comes from this historical footnote. That aside, some of Hooker’s men caught wind of the blue dog legend and determined to dig up the buried treasure. When they went to abscond with the money, they were confronted by the luminous specter of the huge blue tick hound who so aggressively challenged them that they gave up the treasure. Olivia Floyd, a Confederate spy who lived at Rose Hill Manor during the Civil War, also said admitted to seeing the ghost of the blue dog.
These days, the property has been owned by Mike Meissner since 1991. He named his Blue Dog Saloon after the legend, and pays homage to the dog with a large oil painting of him. The last known recorded incident of someone encountering the ghost dog occurred in 1971 when his mournful howl was heard, though it’s said that the howl of the faithful dog is most prominent on Feb. 8th.

One thought on “Hookers, Treasure, and a Blue Ghost Dog”