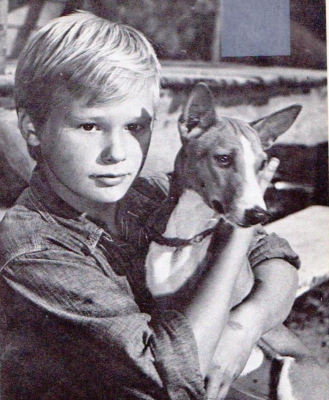 Most people who went to see the movie, “Goodbye, My lady” in 1956 had never heard of a Basenji before. By the film’s end, they know plenty.

The movie based on a book James H. Street tells the tale of a boy, “Young Skeeter,” who experiences adulthood by finding, befriending and training a stray dog, only to have to return her to its rightful owner. It starts out innocently enough. Young Skeeter hears strange noises in the night, “like a ghost laughing.” The “ghost” is a small, strange dog that can laugh and cry, and outrun the fastest hounds in the county. Skeeter names the dog, “Lady.”

“Lady” was played by a six month old Basenji named, “My Lady of the Congo,” owned by Veronica Tudor-Williams of Molesey, England. “My Lady” was flown to Hollywood, later to be followed by four other young Basenjis to act as doubles including her sibling, “My Lord of the Congo,” and “Flageolet of the Congo,” (who would go on to become an International Champion). “My Lady,” however, did most of the scenes.

If you chose to watch the movie (and the entire film is available on You Tube) spoiler alert ahead:

The dog and “Young Skeeter” are separated in the movie, but in real life, a written agreement drawn up when “My Lady” was chosen for the film stipulated that upon completion of filming, Brandon deWilde, the boy who played “Young Skeeter,” would get to keep the dog. Good thing. When not filming, “My Lady” spent all her time with the 13-year-old, and a strong attachment developed between them.

“My Lady’s” breeder wrote a wonderful account about the experience of suppling a Basejni for the movie. Read it here.