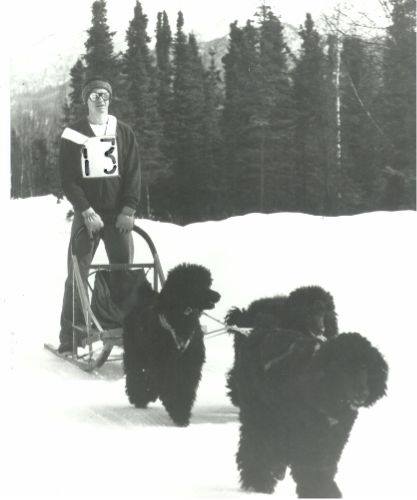 Iditarod 2017, is underway, and as we populate our website with the approximately 9,000 posts put on Facebook before the site was built in May, 2016, we re-share the ones that were hugely popular; this post was “liked” by 23,944 people in the 24 hours following its posting!

You think you know Poodles?

In the early 1990s, the famous 1,100-mile Iditarod Trail Sled Dog Race created a rule stipulating that only northern breeds such as Siberian Huskies and Alaskan Malamutes would be henceforth eligible to race. Thank John Suter and his Standard Poodles for the rule change. Musher, John Suter, entered the 1988 competition with Standard Poodles (and some Poodle crosses) as his dogsled team. Suter had brought in experienced sled dogs and mushers to teach the Poodles about “mushing,” and of course thePoodles learned very quickly. Suter’s finish in 1988 was respectable in a race where even finishing is an accomplishment of which to be proud. That first team placed 38th out of 52 starters, and Suter subsequently raced (and finished) the Iditarod with all-Poodle teams in 1989, 1990, and 1991. As for the rule change, race organizers pointed out that some of the Poodles were unable to complete the race due to frozen feet and hair matting issues.

Be sure to visit the post that shows John Suter appearing on the Tonight Show with Johnny Carson.

Image of Suter and his Poodle team

4 thoughts on “The Iditarod Poodles”