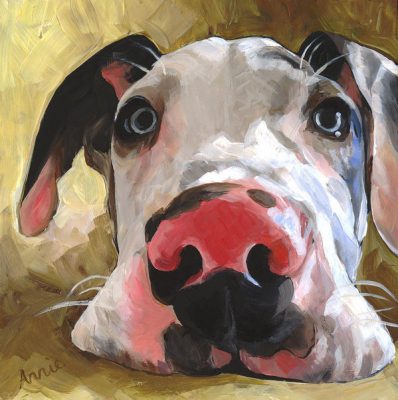 Let’s get in the mood, shall we, by listening to a little Ghostbuster music:

In the Middle Ages, Great Danes were thought to ward off evil spirits and ghosts, and thus were allowed to roam about on their owners’ estate. This breed legend suggests one reason why the cartoon character, Scooby Doo (a dog who helps his human gang investigate eerie occurrences), was a Great Dane. The less romantic reason is that the artist who designed Scooby-Doo for Hanna-Barbera, Iwao Takamoto, based his design on sketches given to him by a colleague who bred Great Danes. Takamoto purposely strayed from a few tenets of the breed standard to make Scooby Doo more comical: A double chin, bowed legs, and a speech impediment that has the dog pronouncing every word as though it began with an “R” (real Great Danes enunciate quite clearly, thank you very much).

We have another thought. If you are an evil doer, would you want the dogs below coming at you (though admittedly, 35 Great Danes is impressive, oh, and consider turning turn the sound off):