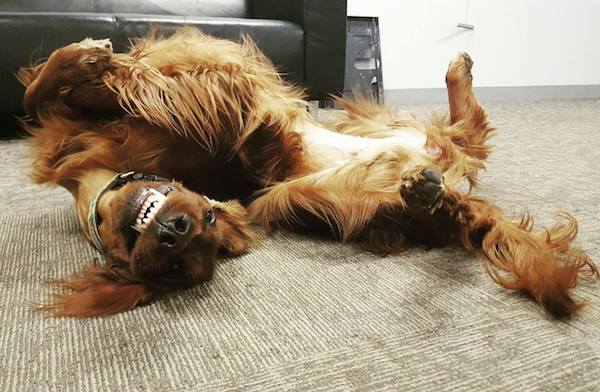 The name, Irish Setter, is said to be derived from the Gaelic term, “Madra rua” which has a literal translation of ‘red dog,” and in Irish, the breed’s name is “sotar rua.” The breed has other monikers, as well: Irish Setters are often described by photographers as the “catwalk models” of the dog world, while artists have named it “the most beautiful of dog breeds.” The photo here, however, underscores something else that Irish Setter owners already know: The breed has a wonderful sense of merriment, but don’t just take our word for it.

Dr. Benjamin Hart and Lynette Hart, both behaviorists from the University of California-Davis, asked a team of experts to examine fifty-six different breeds of dogs by measuring their playfulness. Experts assessed the dogs’ willingness to play, run after balls, Frisbees or Kongs, and just be able to goof off with their person.  The Irish Setter ranked first on the list of the eleven most playful breeds. For anyone curious, the breeds that followed were, in order, the English Springer Spaniel, Miniature Schnauzer,  Cairn Terrier, Airedale Terrier, Standard Poodle, Shetland Sheepdog, Golden Retriever, Australian Shepherd, Miniature Poodle, and German Short-Haired Pointer.

Writers of the breed standard knew of what they wrote. Exuberantly lively and amusing is one definition for a word which appears in the section on temperament: Rollicking.

10 thoughts on “Irish Eyes ARE Smiling”