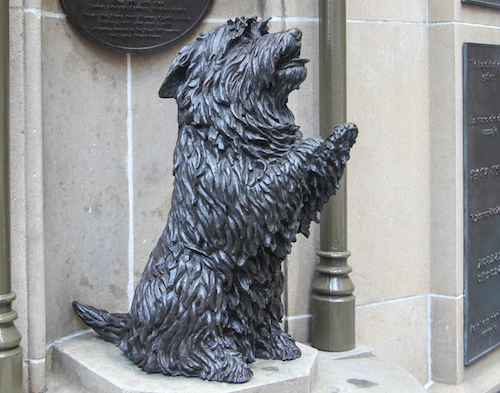 Statues of famous dogs are known throughout the world: Greyfriar’s Bobby, Haachi, and Fala among them, but lesser known is a bronze statue of Queen Victoria’s favorite dog, “Islay,” a loyal Skye Terrier who died too young (five years old) at the paws of a cat in a dispute that ended badly for the dog.

Sydney sculptor, Justin Robson, modeled his piece from a sketch made by the Queen in 1843. At a cost of $10,000, the statue stands outside the Queen Victoria Building, George St, Sydney, Australia (where, rumor has it, it the bronze disguises a ventilation shaft for a parking garage underneath the building). “Islay” is shown begging above a wishing well for the Royal Institute for Deaf and Blind Children, and included on the well is a poem telling his story. It’s been translated into Braille, and four proverbs teaching about the morality of giving appears in six different languages, along with a piece of stone from Blarney Castle in Ireland.

Since 1998,  a recorded request for donations “from the dog” is played from hidden speakers at regular intervals. The recording can be heard in the video clip below, but if you have trouble understanding it, it says, “Because of the many good deeds I’ve done for deaf and blind children, I have been given the power of speech,” and goes on to give thanks for donations. The voice was provided by a by local radio personality, John Laws, and ends with two barks (also by Laws).