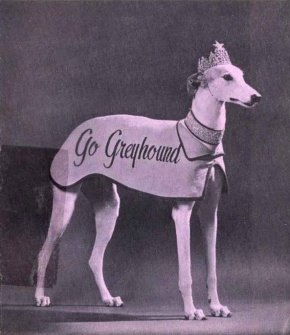 Riding a Greyhound bus was a rite of passage for many of us. A few factoids: The Greyhound fleet consists of about 1,200 active buses. One Greyhound bus takes an average of 50 cars off the road, and achieves 184 passenger miles per gallon of fuel. It serves over 3,800 destinations in North America, employs around 6,161 people, and last year carried 18 million people over 5.5 billion passenger miles.

When Greyhound’s Ed Stone set up a route from Superior, Wisconsin to Wausau, Wisconsin sometime in the 1920s, he saw the reflection of the bus in a store window and was reminded of a Greyhound dog. Stone adopted the “Greyhound” name for that segment of the Blue Goose Lines, but it became so popular that the name was later applied to the entire bus network. In 1929, the running Greyhound became the bus line’s logo.

In 1957, Greyhound introduced its goodwill ambassador, a Greyhound named “Lady Greyhound” (NGA registered name: Steverino) during its sponsorship of NBC’s “Steve Allen Show.” Bred by Roy Lee of Clay Center, Kansas and born on January 28, 1957, Lady Greyhound and would appear at numerous civic events nationwide for the next decade in her diamond-studded tiara and collar. She “gave” radio interviews, hobnobbed with fashion models, and in 1963, attended the New York World’s Fair where she had her own fashion show and handed out “pawtographs.” She had her own car, personal handler, and fan clubs, became a symbol of a Philadelphia safety campaign and was insured by Lloyd’s for $300.000.

Lady Greyhound would eventually whelp nine puppies by Ch Rudel’s Victor who either were given away to children or replaced her when Lady retired.

The Lady Greyhound campaign ended in 1970.