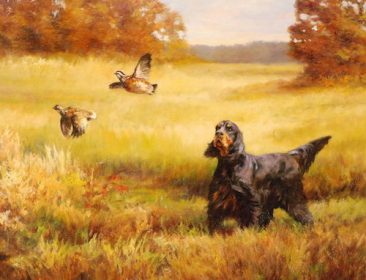 The largest of the setters is also the heaviest, most heavily coated, and most methodical worker of the setters, as well as the rarest, but the Gordon Setter is no stranger in American history.  The first Gordon Setters to set foot in America were a pair imported in 1842 from the Gordon Castle kennels by George Blunt of Morristown, New Jersey.  He kept the big male named, “Rake” for himself,” and his friend, Secretary of State, Daniel Webster, took “Rachel.” Both dogs were reported to be excellent hunters,  but the friends had a running rivalry over whose dog was better.  Little matter now. “Rake” and “Rachael” are regarded as the foundations of the breed in America, and 42 years after their arrival to America, the Gordon Setter became one of the nine original breeds recognized by the AKC at its founding.

“Living Color” by Teri Gillespie is available as a print, poster, and many other formats here.

6 thoughts on “The Largest of the Setters: Beauty, Brains and Birdsense”