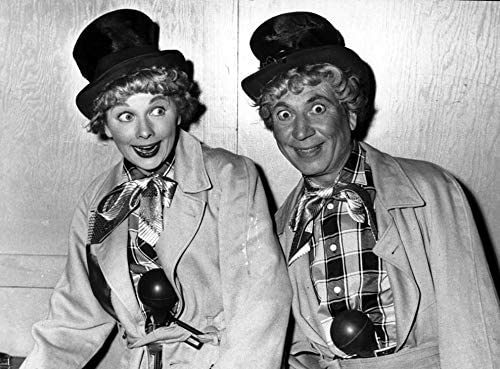 Lucille Ball and Harpo Marx are likely to be names recognized only by people of a certain age, or by those who watch old television reruns on TV. Younger viewers may not know how accomplished and highly influential both actors were in their day, though Lucille Ball was unfairly attacked by feminists born years after her death. As we see it, people should be judged through the lens of their own time, and “I Love Lucy” was a reflection of how things were in the 1950s. That said, Lucille Ball’s achievements were ahead of her time.

Lucille Ball’s influence made I Love Lucy one of the first television shows to be recorded in the way that became standard for television sitcoms. She insisted that the show be taped in front of a live studio audience (avoiding the horrible canned laughter that other sitcoms would come to use), and drawing upon her film experience, she urged that the show be taped using three cameras, unheard of for a TV show.  When she became pregnant in real life, she had the pregnancy written into scripts – shocking at the time. For a long time, the episode in which Lucy gives birth ( “Lucy Goes to the Hospital”)  held the record for most watched television episode of all time (later to be supplanted by the finale of M*A*S*H).  That baby episode was such a major media event that 44 million people (or 72% of all American households with a television at that time) watched. By comparison, President Eisenhower’s inauguration the next day only drew a television audience of 29 million viewers.

The company she and her husband, Desi Arnez, formed, Desilu Productions, would go on to produce Star Trek and The Untouchables. Ball was the first female inductee into the Television Academy’s Hall of Fame. She later receiving a Lifetime Achievement Citation from the Kennedy Center for the Performing Arts in 1986, and was posthumously honored with the Presidential Medal of Freedom in 1989.

Harpo Marx was the second-oldest member of the Marx Brothers, and the lovable “mute”of the comedy team.  A talented mime and gifted harpist,  Harpo’s comic style was entirely visual.  He never spoke during performances, relying instead on blowing a horn or whistling to communicate.  He and Lucille Ball crossed paths on an episode of I Love Lucy, and the famous mirror scene which took intense rehearsing for reasons that become apparent when you watch the clip below:

Because of the photograph below, some people are under the impression that Harpo was associated with Afghan Hounds,  but the relationship was through a sibling. 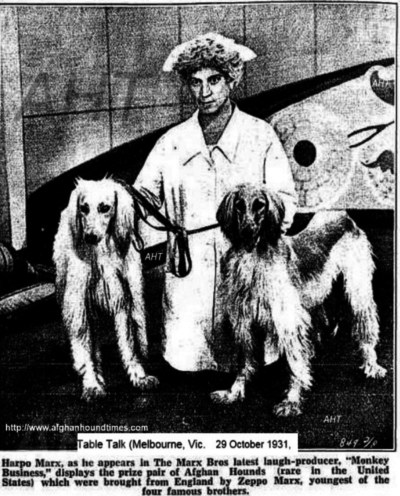 It was his younger brother, Zeppo, who was one of the first people to bring the breed into the United States in 1926. The two dogs that Zeppo imported from the U.K. were “Asra of Ghazni,” and “Westmill Omar.” 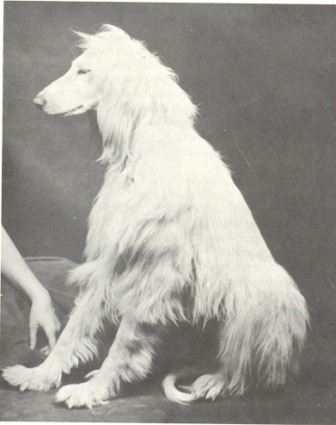 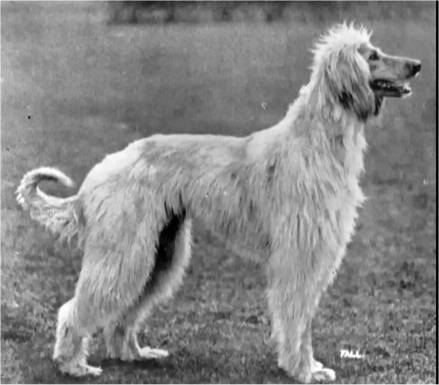 There’s a fine article about the proverbial “rest of the story” in this issue of the Afghan Hound Times from which this image of Harpo posing with the dogs comes.

Lucille Ball didn’t have the distinction of being an early breed fancier, but she was a great animal lover who owned many dogs during her life. Her first was a Fox Terrier named “Whoopee,” whom she got as a teenager. During her marriage to Desi, two  American Cocker Spaniels made the Desilu Ranch their home, and later in life, Lucy had a series of Toy Poodles, all named “Tinker.” When one passed away, the next was named Tinker II, and so on.

What IS it about Gordon Setters that quickens our pulse???? ...

The Largest of the Setters: Beauty, Brains and Birdsense

Our finale to a Purebred of Interest always urges folks interested in the breed to DO YOUR HOMEWORK. The owners and breeders who have given of their time here today are a wonderful source, but you may also want to check out the breed clubs which follow in no particular order. If we've missed one, please feel free to add it.

To our guests - thank you!! Thank you for sharing your time, expertise and wisdom with the rest of us!

The American public was smitten, and so were notable names, and the list is a long one, though we ask to be forgiven if some of these were misidentified by the sources, and were actually English Cockers. Ready: